Biden pledges support for Texas amid recovery from winter storm 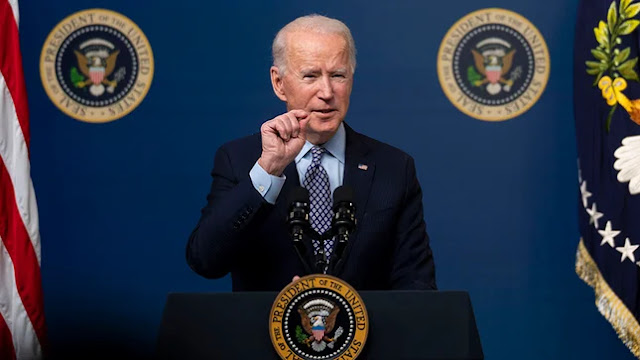 President Biden spent Friday in Texas receiving a briefing on the recent winter storm and surveying a local food bank, pledging to help the state recover from the effects of harsh weather and power outages.
"Our prayers are with you in the aftermath of this winter storm," Biden said in remarks at NRG Stadium in Houston. "We will be true partners to help you recovery and rebuild from these storms and this pandemic and this economic crisis. We are in for the long haul."
Biden spent most of the day with Texas Gov. Greg Abbott (R) and was briefed on ongoing recovery efforts at the Harris County Emergency Operations Center. Biden was told of ongoing efforts to repair water systems in Harris County, where 57,000 residents remain under boil water notices.
He and first lady Jill Biden later toured the Houston Food Bank, where they met with local volunteers.
Biden also met with Sen. John Cornyn (R-Texas), Democratic Reps. Sylvia Garcia, Sheila Jackson Lee, Al Green and Lizzie Pannill Fletcher, and Houston Mayor Sylvester Turner (D) on the visit.
Biden used his remarks to carry forward his message of unity, describing those impacted by both the bout of frigid weather and the coronavirus pandemic not as Republicans or Democrats but as "fellow Americans."
"When a crisis hits one of our states like the one to hit Texas, it’s not a Republican or Democrat who is hurting — it’s our fellow Americans who are hurting, and it’s our job to help everyone in need, look out for one another, leave nobody behind," Biden said.
Biden spoke at NRG Stadium, a mass vaccination site in the state of Texas. He quickly pivoted to his administration’s efforts to partner with states to vaccinate the U.S. population, mentioning that the country surpassed the 50 millionth coronavirus vaccine shots earlier this week.
Biden also celebrated the Food and Drug Administration (FDA) advisory panel’s endorsement of the single-dose vaccine produced by Johnson & Johnson. Still, he cautioned that it would be an arduous process to vaccinate the entire American population and encouraged individuals to continue to follow public health guidance.
"Wear your masks. It’s not a political statement, it’s a patriotic thing you can do," Biden said.
The president also called for bipartisan action to address the pandemic, noting his engagement with Cornyn and Abbott on Friday. His remarks came as House Democrats prepared to pass Biden’s $1.9 trillion relief package, which is not expected to get Republican support.
"We disagree on plenty of things and there’s nothing wrong with that, but there’s plenty of things we can work on together and one of them is represented right here today: the effort to speed up vaccinations," Biden said.
The trip was Biden’s third official out-of-state visit since becoming president. Last week he traveled to Wisconsin to participate in a CNN town hall and toured a Pfizer coronavirus vaccine plant in Michigan.
Biden signed emergency declarations for Texas, Louisiana and Oklahoma in the wake of the storm, and has also approved major disaster declarations for Texas and Oklahoma to free up more federal resources for the states and their residents. The Federal Emergency Management Agency (FEMA) has sent supplies including water, blankets, generators, diesel fuel and meals.
Texas