Biden orders US strikes on Iranian-backed militia facilities in Syria 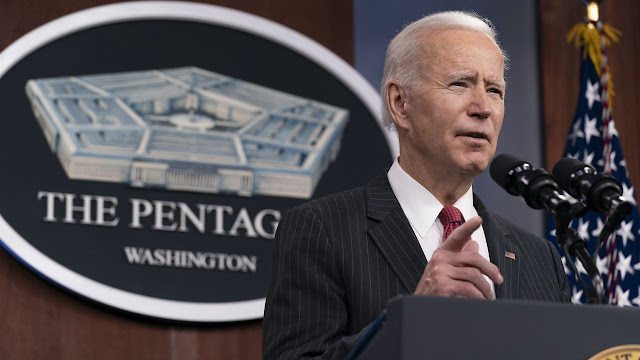 The U.S. military hit facilities used by Iran-backed militants in eastern Syria on Thursday in retaliation for recent rocket attacks in Iraq targeting U.S. interests, the first known military action ordered by President Biden.
“At President Biden’s direction, U.S. military forces earlier this evening conducted airstrikes against infrastructure utilized by Iranian-backed militant groups in eastern Syria,” Pentagon press secretary John Kirby said in a statement.
“These strikes were authorized in response to recent attacks against American and coalition personnel in Iraq, and to ongoing threats to those personnel,” he added. “Specifically, the strikes destroyed multiple facilities located at a border control point used by a number of Iranian-backed militant groups, including Kait’ib Hezbollah (KH) and Kait’ib Sayyid al-Shuhada (KSS),” he added.
Describing the strikes as a “proportionate military response,” Kirby said they were carried out in concert with “diplomatic measures,” including consulting partners in the U.S.-led military coalition in Iraq and Syria.
“The operation sends an unambiguous message: President Biden will act to protect American and coalition personnel,” Kirby said. “At the same time, we have acted in a deliberate manner that aims to de-escalate the overall situation in both eastern Syria and Iraq.”
The U.S. strike comes after three rocket attacks since last week targeted U.S. personnel and other interests in Iraq.
In the most serious incident, an attack last week in Erbil killed a non-American contractor working with U.S. forces and injured nine people, including six Americans.
Over the weekend, a rocket strike at an Iraqi military base injured one person. The base is home to a U.S. defense company that supports Iraq's F-16 program.
And on Monday, rockets landed near the U.S. Embassy in Baghdad. No injuries or deaths were reported from the attack, but Iraqi officials reported some minor property damage, including to four civilian vehicles.
Kait’ib Hezbollah, an Iran-backed militia the United States has accused of carrying out similar rocket attacks in the past, earlier this week denied any role in the recent spate of attacks.
The Biden administration had been refraining from attributing the attacks to a particular group, leading to speculation it was attempting to keep temperatures with Tehran low as it seeks to revive the Iran nuclear deal.
Administration officials have said they were waiting for Iraq to finish its investigation into the attacks before blaming a group or taking action.
“We will respond in a way that is calculated, within our own timetable, and using a mix of tools at a time and place of our choosing, as you’ve heard me say before,” State Department spokesperson Ned Price said Monday. “What we will not do is lash out and risk an escalation that plays into the hands of Iran and contributes to their attempts to further destabilize Iraq.”
By contrast, the Trump administration was quick to blame Iran for similar rocket attacks, a practice critics charged led to escalatory cycles that brought the two sides to the brink of war.
In response to a late 2019 rocket strike that killed a U.S. contractor, the Trump administration struck Kait’ib Hezbollah, setting off a series of events that included the U.S. strike that killed Iranian Gen. Qassem Soleimani and an Iranian strike on an Iraqi base that injured more than 100 U.S. troops.
World