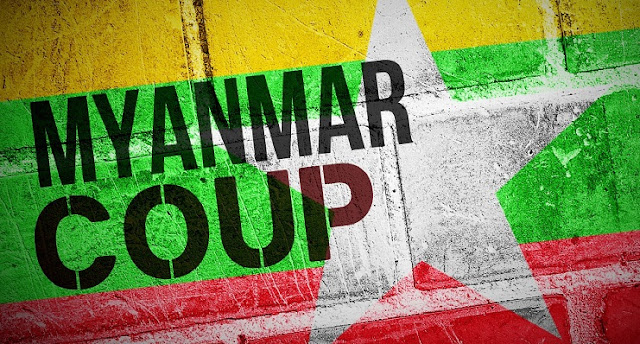 President Biden on Wednesday announced sanctions targeting Myanmar's military officials, their families and some businesses following a coup in that country that led to the detainment of democratically elected government officials.
Biden made his announcement at the White House, saying that he signed an executive order allowing for sanctions on military leaders who directed the coup, blacklisting their business interests and imposing restrictions on their family members. He did not name the officials in the announcement.
The president said he consulted closely with Senate Minority Leader Mitch McConnell (R-Ky.) and “allies and partners” around the world, and in particular the Indo-Pacific, in an effort to begin to build a coordinated international response to the coup.
“A strong and unified message emerging from the United States has been essential, in our view, to encouraging other countries to join us and pressing for an immediate return to democracy,” the president said.
The move comes following Myanmar’s military instituting a state of emergency on Feb. 1, overthrowing the civilian-led government and arresting prominent politicians including Nobel Laureate Aung San Suu Kyi and President Win Myint.
The Biden administration quickly condemned the takeover and determined it a military coup shortly after, triggering sanctions and a review of U.S. assistance to the country.
The president said Wednesday he is further directing steps be taken to prevent military generals from having access to $1 billion in government funds held in the United States and will impose “strong export controls” and freeze assets to the government in Myanmar, which is also referred to as Burma.
The U.S. will maintain support for Myanmar’s health care system and civil society groups and “other areas that benefit the people of Burma directly," Biden said.
“Today, I again call on the Burmese military to immediately release the democratic political leaders and activists that they now detain, including detaining Aung San Suu Kyi and Win Myint, the president,” Biden said.
His announcement Wednesday marks the first time the president has used punitive measures since taking office.
Biden further spoke out against any violence directed towards protesters in Myanmar demonstrating against the military coup, which have gathered momentum in recent days with thousands taking to the streets.
The United Nations has warned against police using “disproportionate force” to disperse protesters amid reports of wounded demonstrators from rubber bullets and water cannons.
“Violence against those asserting their democratic rights is unacceptable and we're going to keep calling it out,” Biden said on Wednesday.
“The people of Burma are making their voices heard and the world is watching. We'll be ready to impose additional measures, and we'll continue to work with our international partners to urge other nations to join us in these efforts.”
Biden further said the U.S., in its return this week to the U.N. Human Rights Council as an observer state, would use its position “to strengthen the world's commitment to human rights in Burma.”
The move by the president signals a return by the U.S. to foreign policy concerned with democracy and human rights, said Chris Ankersen, clinical associate professor at the NYU School of Professional Studies Center for Global Affairs.
As part of this, the U.S. had earlier joined a statement the Group of Seven denouncing the coup, and the president on Wednesday said the U.S. “helped bring together” the United Nations Security Council when it issued a joint statement last week calling for the democratically-elected government to be reinstated and the release of government officials.
Yet Ankersen cautioned that the impact of the president’s announced sanctions is likely limited.
“Senior military officers must have anticipated this,” he wrote in an email.  “China will be able to provide some financial relief to at least partially offset this.”
Top military officials in Myanmar, including General Min Aung Hlaing, who assumed leadership of the country with the military coup, were sanctioned by the Trump administration in 2019 for participating in gross human rights abuses against the minority Rohingya population and other ethnic groups.
Ankersen also expressed skepticism over the follow through of countries allied with the U.S. to join in the sanctions.
“Biden says the US will continue to urge other countries to follow suit. This indicates that the US has not yet been successful in gaining cooperation from others in imposing sanctions,” he said.
Joshua Kurlantzick, senior fellow for southeast Asia at the Council on Foreign Relations, said that the president has the possibility to impose more broad based penalties on top of the targeted sanctions, but that the likelihood of that is low given the threats to the civilian population.
“They punish the whole population there, which is really suffering right now, not clear they are effective, [and] other countries would be reluctant to join in,” he wrote in an email. “I think this type of targeted sanctions is what will be on the table now.”
World