Bezos stepping down as Amazon CEO 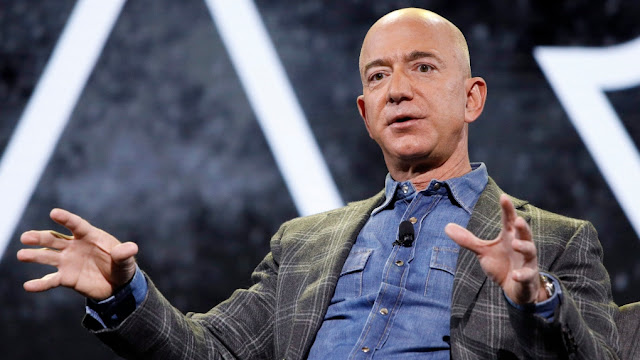 Amazon announced Tuesday that CEO Jeff Bezos will be stepping down from his top spot and transitioning to the role of executive chair of the company's board.
Bezos will transition out of his role in the third quarter of 2021, the company said while announcing its quarterly earning report from the end of last year.
Andy Jassy, the current head of Amazon Web Services (AWS), will succeed Bezos as CEO of the e-commerce giant.
In the report, Amazon announced its highest quarterly revenue ever, at $125 billion.
Bezos touted the success at the end of last year in announcing his decision to step down as CEO, calling it the “optimal time for transition.”
“Amazon is what it is because of invention,” Bezos said in a statement.
“If you do it right, a few years after a surprising invention, the new thing has become normal. People yawn. That yawn is the greatest compliment an inventor can receive,” he added. “When you look at our financial results, what you’re actually seeing are the long-run cumulative results of invention. Right now I see Amazon at its most inventive ever, making it an optimal time for this transition.”
Since founding Amazon in 1994, Bezos has amassed an estimated net worth of $196.5 billion.
While other companies in various industries have taken a hit amid the pandemic, Amazon has continued to report massive earnings. Even more shoppers have flocked to the online marketplace as coronavirus restrictions have curbed in-person shopping access.
Amazon attributed some of its success from the end of last year to a “record-breaking holiday season.”
Amazon reported a 44 percent increase in net sales, reaching the company’s record $125.6 billion in the fourth quarter of last year. For comparison, in the same time period in 2019 the company had reported $87.4 billion in net sales.
Amazon also reported a total net sales of $386.1 billion in 2020, an increase from the $280.5 billion the company reported in 2019.
The company's growth since its founding 27 years ago has attracted mounting scrutiny as officials look at the market power among the top players in the tech industry.
Amazon is facing accusations, along with other tech giants, of stifling competition in the market. The House Judiciary panel on antitrust released a report on competition in digital marketplaces in October, calling out Amazon’s dual role as the operator of the market and a seller in the same marketplace.
Amazon pushed back on the House report, stating that “large companies are not dominant by definition.”
As Bezos looks to pull back his role, Amazon is also facing an upcoming battle over warehouse workers looking to unionize.
Amazon has largely ended pushes to unionize in the U.S., but workers at an Amazon warehouse in Alabama are heading toward a potential vote to unionize. Workers at the Bessemer, Ala. warehouse in November filed a petition with the National Labor Relations Board (NLRB) to join the Retail, Wholesale and Department Store Union, and a vote is expected to take place this year.
National