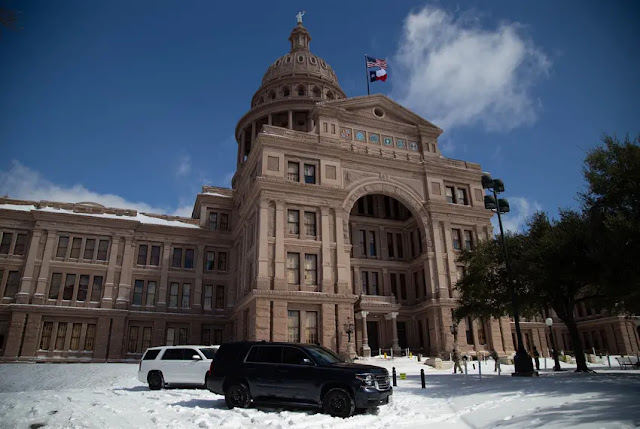 By Ross Ramsey
Between winter electricity blackouts, a haphazard rollout of COVID-19 vaccines and the Texas government’s overall response to the pandemic over the last year, the theme of the current legislative session and the next election cycle ought to be easy.
Do the people running state government in Texas know what they’re doing?
It’s still freezing outside, and millions of Texas households have been without power for more than 24 hours. It’s dangerous and infuriating; the similarities between outage and outrage don’t stop at spelling.
The justified anger when the people who are hired to keep us safe are not keeping us safe makes for rough politics — as it should. That’s one reason you see so much of the political herd working as hard on blame and shame right now as on the state’s widespread utility failures during this disastrous winter storm.
Or on the bumbling rollout of vaccines. Or the meandering, confused responses to the pandemic itself, beginning just under a year ago. It’s all fuel for reasonable doubts about the Texas state government’s ability to meet big problems.
The winter power disaster doesn’t have the novelty of the pandemic. Texas hasn’t seen a pandemic for a century. It’s only been a decade since a long freeze disrupted the state’s electric service.
A winter storm in 2011 — not as big as the one we’re in now — prompted rolling blackouts that affected 3.2 million electric customers. A federal inquiry done by the Federal Energy Regulatory Commission and the North American Electric Reliability Corp. found some familiar-sounding problems in the state’s handling of a multi-day hard freeze.
Then as now, the utilities and the Electric Reliability Council of Texas — the state’s power grid operator — expected to have the electricity supply needed for a surge in demand. “They all had adequate reserve margins, based on anticipated generator availability,” the report said. “But those reserves proved insufficient for the extraordinary amount of capacity that was lost during the event from trips, derates and failures to start.”
At the worst point, about a third of the generation was unavailable. “These extensive generator failures overwhelmed ERCOT’s reserves, which eventually dropped below the level of safe operation.”
And look at this part: “Had ERCOT not acted promptly to shed load, it would very likely have suffered widespread, uncontrolled blackouts throughout the entire ERCOT Interconnection.”
Here we are again. Demand spiked in the face of cold weather, as it was expected to. But the amount of generated electricity fell, too — far short of what was projected and short of what was needed.
As a result, demand exceeded supply, “rolling blackouts” were ordered, and more than 4 million Texas households lost power, putting people in sometimes hazardous conditions that state elected officials and regulators are supposed to manage.
It appears that wind and solar power produced more electricity this week than they were expected to produce, but at this time of year, that’s a relatively small part of the expected statewide generation. Generation from gas and coal plants was far below expectations, causing supply to fall as demand rose. How much of that is bad design — a case where the system should be reworked — and how much was operator error is still to be sorted out.
House Speaker Dade Phelan wants two committees — Energy Resources and State Affairs — to hold hearings on Feb. 25 “for the express purpose of helping Texans understand what went wrong and how we can prevent these conditions from happening again.
“We must cut through the finger-pointing and hear directly from stakeholders about the factors that contributed to generation staying down at a time when families needed it most, what our state can do to correct these issues and what steps regulators and grid operators are taking to safeguard our electric grid,” he said Tuesday in a news release.
Gov. Greg Abbott, a little while later, used a declaration of an emergency order — a way of raising the profile of something to get the Legislature’s attention — to point his finger at ERCOT.
“The Electric Reliability Council of Texas has been anything but reliable over the past 48 hours,” he said. “Reviewing the preparations and decisions by ERCOT is an emergency item so we can get a full picture of what caused this problem and find long-term solutions.”
Later, on Houston's KTRK-TV, Abbott said the leaders of ERCOT ought to resign. “This was a total failure by ERCOT," he said.
And he might turn out to be right, too, but his information is incomplete at this point. What if lawmakers connect the dots between the current emergency and the emergencies that were underway a week ago, when it was 70 degrees outside? What if their inquiries put someone else on the hot seat?
Texans might turn to the people elected and hired to protect the rest of us in the face of life-threatening disasters, whether from disease or weather or hostile humans. Political strength and popularity comes from competence.
What have we here?
This article originally appeared at the Texas Tribune.
Opinion