A few thoughts on Rush Limbaugh 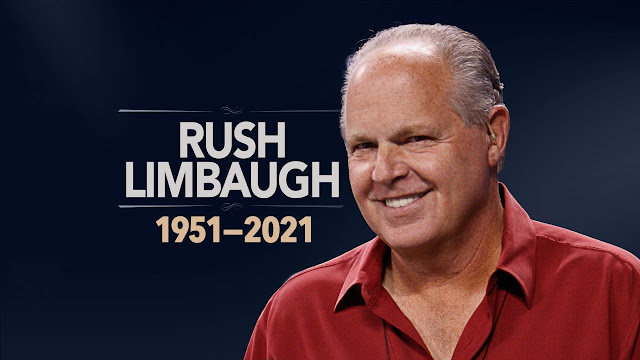 Legendary. Unique. The GOAT (greatest of all time) of political talk radio. And it ain't even close.
Rush Limbaugh passed away Wednesday at the age of 70. He had battled Stage 4 lung cancer for more than a year, working when he could while undergoing treatment.
It was a marvel that Limbaugh was able to perform at such a high level sitting behind his golden EIB microphone in his final weeks and months. You would never have known that he was sick and suffering, and that's a testament to his talent (“On loan from God,” he’d often quip) and his commitment to his craft.
Rush’s talk radio career began in 1988, and he quickly caught fire on the national level. Limbaugh started with 56 stations; he ended with more than 600. According to his official website, the Missouri-born host had 27 million people tuning in on a weekly basis. His fans were referred to as "dittoheads” — because they often replied "Ditto" to his professed opinions or to the compliments of previous callers.
What always amazed me when listening to Rush was how effortless he made it all sound for three hours every day, with no one to lean on. He had no co-host. No sidekick. And most amazingly, almost always, with the exception of say, the president or someone extremely coveted, he had no guests whatsoever.
His secret? The old military training rule: "The more we sweat in training, the less we bleed in war." Your average talk radio host wings it by showing up, flipping through a newspaper and depending heavily on callers.
Not Rush. The man was notorious for prepping. He also was exceptional at effortlessly weaving narratives. More importantly, he made you look at the same story everyone else was discussing from an angle you hadn't considered. That made The Rush Limbaugh Show appointment listening, the kind that made you sit in a parking lot long after reaching your destination to hear Rush finish his point.
Sean Hannity, who followed Limbaugh on many stations across the country, explained Limbaugh's phenomenon this way: "There is no talk radio as we know it without Rush Limbaugh. It just doesn't exist. I would even make the argument in many ways there is no Fox News or even some of these other opinionated cable networks."
And he may be right. Rush proved there was a huge appetite for more conservative perspectives in a political media that otherwise was presented left-of-center as the nation entered the '90s. Fox News would launch in 1996 and, within five years, rise to the top of cable news. Before Fox came on the scene, however, its creator, the late Roger Ailes, produced a TV show hosted by Limbaugh. One has to wonder if the idea for Fox News came about as a result of Ailes working with Rush.
Limbaugh had his critics and diehard foes – he drove most on the political left to crazed distraction – and had a number of cringe-worthy moments and controversies over the years. He sometimes toyed with conspiracy theories, including the false narrative that the 2020 election was stolen from President Trump.
But, beyond his impact on broadcasting and conservatism, he also engaged in some praiseworthy philanthropy for leukemia and lymphoma sufferers, the Marines and the military in general, and law enforcement.
This past Christmas, during his final show of 2020, Limbaugh said:
“My point in everything today that I’m sharing with you about this is to say thanks and to tell everybody involved how much I love you from the bottom of a sizable and growing and still beating heart, and there’s room for much more," he told listeners. "All because I have learned what love really is during this. You know, I have a philosophy there’s good that happens in everything,” he said. “It may not reveal itself immediately, and even in the most dire circumstances, if you just wait, if you just remain open to things, the good in it will reveal itself. And that has happened to me as well in countless, countless ways.”
Rest in peace, Rush Limbaugh. You will be missed. But you won't be replaced.
Opinion