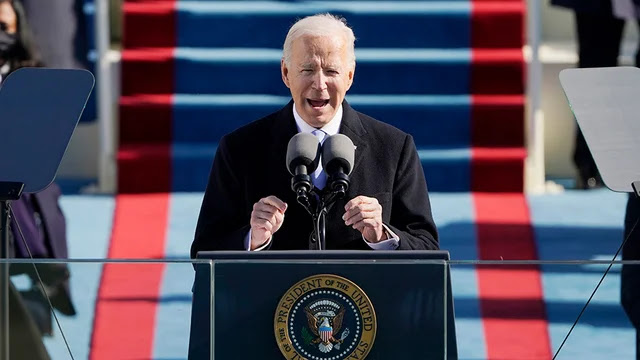 World leaders congratulated President Biden shortly after his inauguration on Wednesday, with allied nations and bodies expressing hope for continued cooperation with the new administration.
“Congratulations President Joe Biden and Vice President Kamala Harris on your historic inauguration," said Israeli Prime Minister Benjamin Netanyahu, who enjoyed a close relationship with former President Trump.
"President Biden, you and I have had a warm personal friendship going back many decades," he added. "I look forward to working with you to strengthen the U.S.-Israel alliance, to continue expanding peace between Israel and the Arab world and to confront common challenges, chief among them, the threat posed by Iran.”
British Prime Minister Boris Johnson, who also found an ally in Trump, tweeted that “America’s leadership is vital on the issues that matter to us all, from climate change to COVID, and I look forward to working with President Biden.”
“The India-US partnership is based on shared values. We have a substantial and multifaceted bilateral agenda, growing economic engagement and vibrant people to people linkages. Committed to working with President @JoeBiden to take the India-US partnership to even greater heights,” said Indian Prime Minister Narendra Modi, another Trump ally.
The laudatory messages come after the Trump administration strengthened some of America’s closest international relationships and roiled others.
Other world leaders who saw their relationship with the U.S. falter during the Trump administration said they look forward to working with the Biden White House on an array of issues.
“Canada and the United States enjoy one of the most unique relationships in the world, built on a shared commitment to democratic values, common interests, and strong economic and security ties. Our two countries are more than neighbours – we are close friends, partners, and allies,” said Canadian Prime Minister Justin Trudeau, who faced a wave of tariffs from the Trump administration.
“We will continue this partnership as we fight the global COVID-19 pandemic and support a sustainable economic recovery that will build back better for everyone. We will also work together to advance climate action and clean economic growth, promote inclusion and diversity, and create good middle class jobs and opportunities for our people while contributing to democracy, peace, and security at home and around the world,” Trudeau added.
NATO Secretary General Jens Stoltenberg, meanwhile, said that the "bond between North America and Europe is the bedrock of our security, and a strong NATO is good for both North America and Europe."
"For more than seventy years, our transatlantic Alliance has guaranteed freedom, peace, and security for our people. U.S. leadership remains essential as we work together to protect our democracies, our values and the rules-based international order,” Stoltenberg said.
Trump made no secret of his antagonism toward the alliance. The former president also repeatedly chastised members for not paying more for the alliance’s defense, threatening to pull out of NATO should countries not increase their spending.
Biden during his inauguration speech echoed promises he made on the campaign trail of bolstering the U.S.’s international alliances. On his first day in office, the new president is expected to sign a wave of executive orders, including ending Trump’s controversial travel ban and reentering the U.S. in the Paris climate accords.
“America has been tested. And we've come out stronger for it,” Biden said Wednesday. “We will repair our alliances and engagement with the world once again, not to meet yesterday's challenges, but today's and tomorrow's challenges, not merely by the example of our power but by the power of our example, strong and trusted partner for peace progress and security.”
World