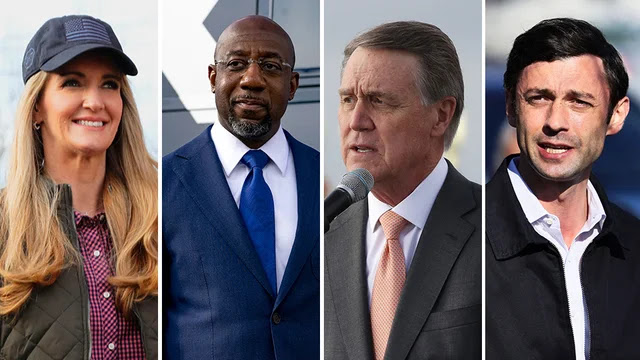 Raphael Warnock is projected to defeat Sen. Kelly Loeffler (R-Ga.), while Jon Ossoff is the favorite to win against Republican David Perdue, putting Democrats on the precipice of controlling the Senate when President-elect Joe Biden is sworn in on Jan. 20.
Warnock declared victory over Loeffler shortly before 1 a.m. on Wednesday morning, and NBC News and CBS News called the race in his favor shortly after.
With 97 percent of precincts reporting, Warnock leads Loeffler by about 40,000 votes.
The race between Perdue and Ossoff is much closer, with the candidates separated by about 3,000 votes and taking turns in the lead throughout the night.
The outstanding votes appear to be concentrated in predominantly Democratic regions of the state, making Ossoff the favorite to win.
If both Warnock and Ossoff triumph, there will be a 50-50 split in the Senate. In that scenario, Democrats would effectively control the upper chamber with Vice President-elect Kamala Harris able to cast tie-breaking votes after she's sworn in with Biden.
If Perdue, whose term ended Sunday, can pull out a victory over Ossoff, Republicans will have a 51-49 majority in the Senate.
That race is not settled yet.
While Warnock appears to be on pace to finish outside the margin needed for a recount, the race between Ossoff and Perdue is effectively tied. That race could be headed for a recount in a state that has been the center of election controversies since Biden’s narrow victory over Trump in November.
Overseas, military and provisional ballots still need to be counted, which could drag the process out for days. As of Tuesday afternoon, some 17,000 military and overseas ballots remain outstanding and they have until Friday to reach elections officials to be counted.
However, there was a growing sense of optimism among Democrats and anxiety among Republicans as election night wore on.
GOP turnout appeared to be down in rural Republican strongholds despite Trump’s late visit to the northern part of the state while Black voters seem to have turned out for Democrats in record numbers. And the GOP’s weakness in the Atlanta suburbs could prove costly to the party’s hopes of hanging on to their Senate majority.
Speaking to reporters Tuesday night, Gabriel Sterling, Georgia’s election systems manager and himself a Republican, said that there remained votes in Republican-leaning rural parts of the state that could help even things out for Loeffler and Perdue.
But with so many votes still to count in the Atlanta-area, he said, “this is going to be a huge boon for the Democratic candidates and a big hit to the Republicans.”
“The outstanding vote is squarely in parts of the state where Jon’s performance has been dominant,” Ossoff’s campaign manager Ellen Foster said. “We look forward to seeing the process through in the coming hours and moving ahead so Jon can start fighting for all Georgians in the U.S. Senate.”
The Perdue campaign said the race is close enough that it will require “time and transparency to be certain the results are fair and accurate.”
“We will mobilize every available resource and exhaust every legal recourse to ensure all legally cast ballots are properly counted,” the campaign said. “We believe in the end, Senator Perdue will be victorious."
Warnock will become only the second Black senator elected from a Southern state since Reconstruction, following Sen. Tim Scott (R-S.C.). The Georgia Democrat is a senior pastor at the historic Ebenezer Baptist Church, where Martin Luther King Jr. once preached.
“We were told that we couldn’t win this election, but tonight we proved that with hope, hard work and the people by our side, anything is possible,” Warnock said in his speech early Wednesday.
“So Georgia, I am honored by the faith that you have shown in me and I promise you this tonight: I am going to the Senate to work for all of Georgia, no matter who you cast your vote for in this election.”
Loeffler, who will join a band of GOP rebels in the Senate on Wednesday to contest Biden’s Electoral College victory, said she would fight to ensure that “every legal vote is going to be counted.”
“We have a path to victory. ... We're going to win this election,” Loeffler said shortly after midnight, before the networks called the race for Warnock.
“It’s worth it for this election to last into tomorrow,” she added.
Still, the Georgia election results represent a seismic shift in electoral politics. Trump became the first GOP presidential candidate to lose the state since 1992 and there have not been two elected Democratic senators from Georgia since 1993.
Trump continues to dispute his election loss in Georgia and other swing states, despite his campaign losing over 50 election legal challenges and the vote having been certified in all 50 states.
Throughout election night, he made unsubstantiated claims about machines being corrupted and Democrats trying to steal the election. Georgia’s Republican secretary of State Brad Raffensperger (R) and Sterling, the election systems manager, disputed the president’s claims, saying the election was running “smoothly” and that there were no reports of widespread irregularities or malfeasance.
The president has been at war with Georgia’s GOP officials since November, accusing them of not doing enough to root out fraud and pressuring them to “find” additional votes that would make him the victor.
After a disappointing night, Republicans are bracing for a chaotic day on Capitol Hill, where dozens of GOP House members and about a dozen Republican senators will dispute Biden’s Electoral College victory.
There is no chance that Congress will overturn the outcome of the election but Trump is pressuring GOP lawmakers to fight the results and investigate his allegations of fraud to the end.
National