Two APD officers injured after being hit by drunk driver 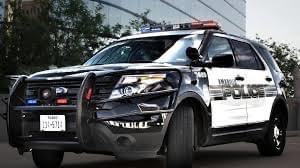 Early Friday morning, Amarillo police officers were blocking the westbound lanes of Amarillo boulevard at Madison for a structure fire. Two marked patrol units were being used to block the roadway.
A 1998 Chevrolet Blazer driven by Angelo Ramos, 34, was traveling westbound on Amarillo Blvd. The Blazer struck the first marked police car, on the driver’s side. This caused the police vehicle to be pushed into another marked patrol unit.
Both police vehicles were occupied by a single officer. The officers and driver of the Blazer were transported to an area hospital with serious, but non-life threatening injuries.
Ramos was medically cleared and then booked into PCDC for intoxication assault. Alcohol is a factor in this crash.
The incident is being investigated by the Traffic Investigation Squad of the Amarillo Police Department.
Local