Trump says he will 'never concede' 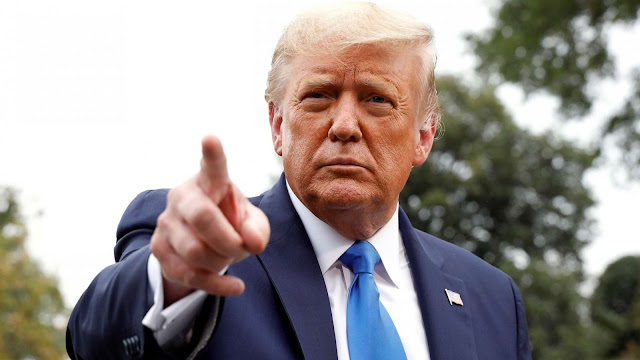 President Trump spent much of his final address before Congress formally certifies Joe Biden as the next president turning on his own party.
Digging in on his refusal to concede the presidential race, he said Republicans’ political futures were at stake on Wednesday if they did not back his effort to overturn the election, singling out a member of House GOP leadership who he called “weak.”
Trump pressured Vice President Pence, one of his most loyal allies, to act outside the bounds of his powers by rejecting electors for Biden, excoriated Georgia Gov. Brian Kemp (R) as “one of the dumbest governors in the United States,” and he swiped at former Attorney General William Barr, complaining that Barr had “changed” because he didn’t want to appear to be Trump’s personal attorney.
“I actually think though it takes more courage not to step up, and I think a lot of those people are going to find that out,” Trump said in remarks on the national mall of Wednesday’s vote. “And you better start looking at your leadership, because your leadership has led you down the tubes.”
“We’ve got to get rid of the weak Congress people, the ones that aren’t any good,” Trump added.
“The Liz Cheneys of the world,” he added, referring to the Wyoming Republican lawmaker who has said she would not object to the Electoral College certification.
Trump insisted, as he has for almost two months, that the election was stolen from him through coordinated and widespread fraud — claims that neither he nor his lawyers have produced evidence to back up.
“All of us here today do not want to see our election victory stolen by emboldened radical left Democrats which is what they are doing, and stolen by the fake news media. That’s what they’ve done and what they’re doing. We will never give up, we will never concede,” a defiant Trump told the crowd. “You never concede when there is theft involved.”
Against the backdrop of the White House, he used the free-wheeling and lengthy address to repeat claims about irregularities in the presidential election in Georgia that were debunked by a top elections official earlier this week and to falsely insist that he won the Peach State and indeed the election in a “landslide.”
“Make no mistake — this election was stolen from you, from me and from the country,” Trump asserted.
Trump has ripped a massive divide in the Republican Party in his final days in office with his futile efforts to challenge the results of the 2020 election. Dozens of House and Senate GOP lawmakers are expected to object to Electoral College votes in at least three states on Wednesday when Congress convenes, despite opposition from a growing number of members of the party.
“We’re going to see whether or not we have great and courageous leaders and whether or not we have leaders that should be ashamed of themselves,” Trump told his supporters Wednesday. “And you know what, if they do the wrong thing, we should never ever forget that they did.”
The objections will not change the results of the election. A majority of lawmakers in each chamber must vote to reject the electors in order to block them. Many Republicans in the Senate have opposed the efforts to object to the results, and Democrats control the House.
Trump has spent the last 24 hours pressuring Pence to use an authority he does not have to reject Electoral College votes when he presides over a joint session of Congress for the certification of Biden’s election win later Wednesday.
“And Mike Pence, I hope you’re going to stand up for the good of our Constitution and for the good of our country,” Trump told the crowd, giving his supporters a false sense of Pence’s authority with respect to the certification process. “And if you’re not, I’m going to be very disappointed in you. I'll tell you right now. I’m not hearing good stories.”
In a letter issued to Congress on Wednesday afternoon as Trump continued his speech, Pence said he would not do what Trump is asking of him.
“I do not believe that the Founders of our country intended to invest the Vice President with unilateral authority to decide which electoral votes should be counted during the Joint Session of Congress, and no Vice President in American history has ever asserted such authority,” Pence wrote.
Trump’s remarks on Wednesday took place in the hour before Congress convened to certify the results. Pro-Trump demonstrators descended on Washington to back Trump’s push to overturn his loss.
The address came as some Republicans blamed Trump’s divisive election rhetoric for the GOP’s loss in Georgia. The Rev. Raphael Warnock was projected the winner of the highly contested Senate runoff against Sen. Kelly Loeffler (R-Ga.) overnight Tuesday, and Democrat Jon Ossoff appears poised to hand a defeat to Republican incumbent David Perdue. If Democrats hold both Senate seats, they will have control of both chambers of Congress and the White House when Biden takes office.
National