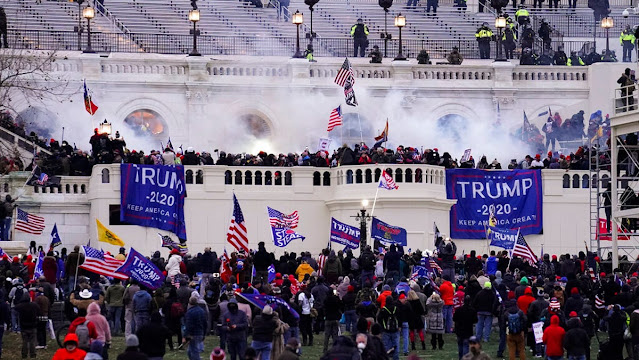 President Trump faces new legal jeopardy over his remarks at a Wednesday rally that incited a mob attack on the U.S. Capitol that left five dead, including one law enforcement officer.
The Department of Justice (DOJ) this week announced charges against 55 people for their alleged involvement in the deadly breach of the Capitol.
And while law enforcement officials said it’s unlikely Trump would be indicted for his comments at the rally that immediately preceded the insurrection, new leadership will take over at the DOJ on Jan. 20, and some legal experts say there’s a legitimate case to be made that Trump’s conduct Wednesday rises to the level of criminal incitement.
“The president needs to be investigated and does have real potential criminal liability for incitement for essentially spurring people on, motivating people to go in there and commit these crimes,” said CNN legal analyst and former prosecutor Elie Honig.
“It's not an easy case to make,” he added. “But if you look at his words, if you look at the language he used, the way he not only urged people to do it, but applauded them after they did it, while they were doing it, that suggests to me he knew exactly what it was leading them into.”
An early test for the Biden administration will be whether DOJ chooses to pursue any of the various investigative threads leading to Trump, or if it will opt to turn the page on the Trump era and sidestep the political baggage that might come with prosecuting a former president.
Some Democrats, for their part, are not likely to forgive Trump for his role in the first massive breach of the U.S. Capitol since the War of 1812. Nor are they likely to forget that former special counsel Robert Mueller’s apparent sole rationale for not charging Trump with criminally obstructing his Russia probe was that DOJ policy prohibits the indictment of a sitting president, but places no such restraints on charging former presidents.
President-elect Joe Biden said multiple times during the 2020 presidential campaign that it would fall to his attorney general to decide whether to prosecute Trump, but has not addressed the question since the Wednesday mob assault on the Capitol.
On Thursday, Biden announced that Merrick Garland would be his attorney general. Garland, a federal appeals court judge whose Supreme Court nomination under former President Obama was blocked by Senate Republicans, made a name for himself while overseeing the prosecution of the 1995 Oklahoma City bombing.
Garland has not given any indication as to the likelihood of Trump being prosecuted when he takes over at DOJ, but some legal experts say the odds are low.
One variable in gaming out Trump’s potential legal exposure is the possibility that he seeks to pardon himself before leaving office. That scenario has long been a topic of speculation, but questions about the unprecedented move have intensified following this week’s violence at the Capitol.
A presidential self-pardon has never been attempted and its lawfulness remains an open question. The general consensus among most experts, however, is that such a maneuver would be illegal.
A more clear-cut legal rule dealing with the scope of a president’s pardon power is that the immunity extends only to federal crimes, not violations of state criminal statutes.
One District of Columbia lawmaker, Councilmember Robert White, called on D.C. Attorney General Karl Racine this week to assess whether the filing of criminal charges against Trump in D.C. would be justified. D.C. law makes it a crime to “willfully incite or urge other persons to engage in a riot,” and violations are punishable by up to six months imprisonment.
A spokesman for Racine told the news outlet DCist that his office was reviewing White’s inquiry, and Racine, in a televised interview, held open the possibility of pursuing charges.
Trump also faces the prospect of both criminal and civil liability in New York.
Manhattan District Attorney Cyrus Vance (D) has sought for more than a year to obtain eight years of Trump’s tax records. Vance's office is looking into payments made to silence two women who allege they had affairs with Trump, including adult-film star Stormy Daniels. Trump’s former attorney and fixer, Michael Cohen, who pleaded guilty to bank fraud, tax fraud and campaign law violations, has said the payments were made to influence the outcome of the 2016 presidential election.
Vance’s office has hinted that its subpoena for Trump’s financial records is part of an investigation into "possibly extensive and protracted criminal conduct at the Trump Organization," including potential fraud allegations detailed in media reports in recent years.
Additionally, New York Attorney General Letitia James (D) is investigating whether the Trump Organization, where Trump is an executive vice president, has been illegally inflating its assets to get tax breaks and attract investors.
At the federal level, calls are growing for Trump's removal under the 25th Amendment to the Constitution. Democrats are also poised to file articles of impeachment as early as next week.
While some of his critics may be satisfied with pursuing those political remedies, others are unlikely to abandon their push for his prosecution.
"Impeach him again," national security lawyer Brad Moss wrote on Twitter, "and indict him for conspiracy to incite a riot and sedition."
National