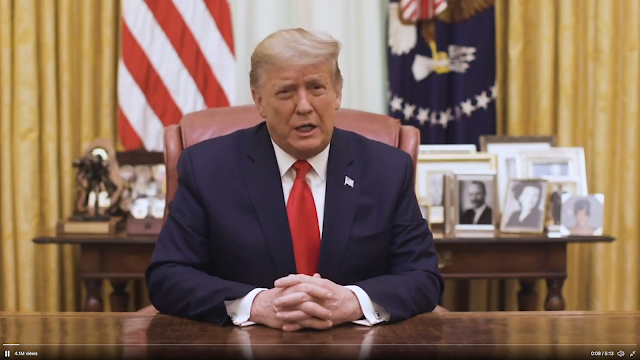 President Trump on Wednesday release a video in which he finally condemned violence one week after a mob fueled by conspiracy theories over the election attacked the Capitol as lawmakers were counting the Electoral College results.
The video came hours after the House voted to make Trump the first president in U.S. history to be impeached twice, and as Trump faces both legal threats and the possibility of a Senate conviction for his actions related to last week's insurrection.
The president, in a five-minute, pre-recorded video address from the Oval Office, made no mention of the impeachment vote, but said he “unequivocally” condemned the mayhem at the Capitol.
“Mob violence goes against everything I believe in and everything our movement stands for. No true supporter of mine could truly endorse political violence,” Trump said.
“No true supporter of mine could ever disrespect law enforcement or our great American flag. No true supporter of mine could ever threaten or harass their fellow Americans. If you do any of these things, you are not supporting our movement. You are attacking it and you are attacking our country.”
A Capitol Police officer was killed in last week's violence, and video and firsthand accounts have since emerged of the mob assaulting police, breaking down doors and shattering windows and carrying zip ties, as well as chanting “Hang Mike Pence.” Dozens have been arrested in connection with the chaos, including one man who entered Speaker Nancy Pelosi's (D-Calif.) office.
Federal prosecutors said Tuesday that some individuals complicit in the riots may face sedition and conspiracy charges.
On the day of the riots, Trump was slow to call for calm and later told the rioters to “go home. We love you.” Under pressure, he issued a video message last Thursday condemning the violence, but has faced pressure to deliver a more forceful rebuke of what transpired.
Trump in the new video expressed no personal regret that any of his actions contributed to the violence, nor did he finally acknowledge President-elect Joe Biden as the true winner of the presidential election. Just a day ago, he said his remarks were "totally appropriate."
A majority of the House viewed his remarks as impeachable, and it seems at least possible 67 senators could agree in the Senate, the threshold necessary for conviction.
Senate Majority Leader Mitch McConnell (R-Ky.) is among the Republicans who has not said how he would vote on impeachment. McConnell on Thursday publicly said he would be listening to the legal arguments.
The crowd that overwhelmed Capitol Police and forced the evacuation of lawmakers had been told repeatedly by Trump and his allies for months that he had unfairly lost the election. This is not true. There is no widespread evidence of fraud, courts have ruled against Trump's claims and GOP officials in several battlegrounds have stood up against him.
At a rally at the Ellipse just outside the White House the day of the mob attack, Trump whipped up supporters with unproven claims about election fraud and urged them to march on the Capitol and “fight.”
"Because you'll never take back our country with weakness. You have to show strength and you have to be strong. We have come to demand that Congress do the right thing and only count the electors who have been lawfully slated." Trump told the crowd. "I know that everyone here will soon be marching over to the Capitol building to peacefully and patriotically make your voices heard."
A majority of House Republicans on Wednesday did not vote to impeach Trump, and a few mentioned his remarks about people making their voices heard peacefully.
Wednesday’s video was shared from official White House social media accounts after Trump’s personal accounts had been suspended from Twitter, Facebook, YouTube and other major platforms amid concerns his remarks might inspire further acts of violence. He took aim at those companies in a part of the video address, condemning censorship.
There are new threats related to Biden’s inauguration scheduled in just a week, and Capitol Hill has been turned into a police and military settlement.
in the video, Trump sought to discourage violence, vandalism and law breaking and said he had received a briefing from law enforcement. He said he has directed federal agencies to use all necessary resources to maintain order and ensure that a transition can occur “safely and without incident.”
“Today I am calling on all Americans to overcome the passions of the moment and join together as one American people,” the president said  in the video. “Let us choose to move forward united, for the good of our families, our communities and our country.”
The taped remarks followed a familiar script for Trump, who throughout his presidency has delivered inflammatory comments only to offer more conciliatory remarks under pressure to do so.
The same pattern played out following violent protests in Charlottesville, Va., where Trump argued both sides were to blame, and again at a presidential debate last year when the president refused to explicitly condemn the Proud Boys, a white supremacist group, only to do so later after facing intense pressure.
Trump also refused to denounce QAnon, a conspiracy theory said to be connected to violence, during a town hall event before the election last year, claiming he knew nothing about them before tacitly expressing support for the fringe theory by saying they are “very strongly against pedophilia.”
National