Trump condemns riots, says he will focus on transition 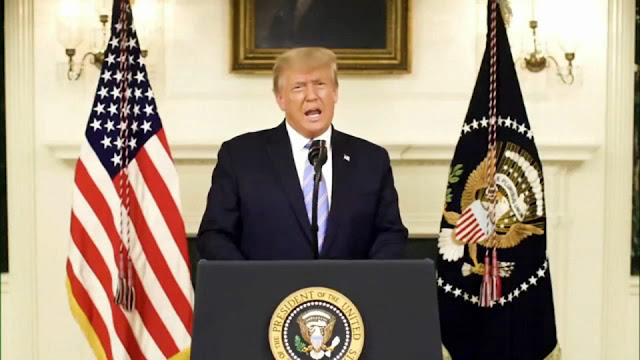 President Trump on Thursday said he would focus on ensuring a smooth transition to the incoming Biden administration following violent attacks by a mob of his supporters that stormed the Capitol on Wednesday.
Trump, in taped remarks released on social media, condemned the violence that unfolded at the Capitol building but did not specifically name a group that caused the mayhem.
Trump called for calm, and for the first time, he said publicly that it was time to move on from the 2020 election.
"We have just been through an intense election and emotions are high," he said. "But now tempers must be cooled and calm restored."
"A new administration will be inaugurated on Jan. 20. My focus now turns to ensuring a smooth orderly and seamless transition of power. This moment calls for healing and reconciliation," Trump added.
The remarks are the president's first acknowledgement of electoral defeat. They came two months after Biden was projected the winner of the election, almost a month after the Electoral College affirmed Biden’s victory, and less than 24 hours after those results were certified by a joint session of Congress presided over by Vice President Pence.
Trump acknowledged the finality of his time in office, saying it had been “the honor of my lifetime”  to serve as president, though he still did not address his repeated claims about widespread fraud.
State election officials as well as former Attorney General William Barr have disputed these claims, stating that there was no evidence of widespread voter fraud in the 2020 presidential election that would alter results.
The message represented a marked shift in Trump's tone in the past 24 hours.
During remarks to supporters on the National Mall before the chaotic episode on Wednesday, Trump said he would “never concede” and falsely claimed that he won the election over President-elect Joe Biden.
He also encouraged his supporters to march toward the Capitol and urge lawmakers to refrain from certifying Biden as the winner.
"You'll never take back our country with weakness," Trump said. "You have to show strength and you have to be strong. We have come to demand that Congress do the right thing and only count the electors who have been lawfully slated."
"I know that everyone here will soon be marching over to the Capitol building to peacefully and patriotically, make your voices heard today," he added.
Trump has been widely condemned for his remarks in Washington on Wednesday, and the day was one of the bleakest in American history, with the violence resulting in five deaths and dozens of arrests on Capitol Hill.
His actions have prompted members of both parties to openly consider removing him from office less than two weeks before his term expires.
Trump, on Thursday, had yet to condemn the rioters despite pressure to do so from numerous allies.
“The demonstrators who infiltrated the capitol have defiled the seat of American democracy,” Trump said in the video message Thursday evening. “To those who engaged in the acts of violence and destruction, you do not represent our country and to those who broke the law, you will pay.”
Trump claimed that he “immediately deployed the National Guard," but multiple media reports stated that it was Pence who pushed for reinforcements.
Rioters who descended on the Capitol broke open doors and windows and forced lawmakers, staff, media and Pence to be evacuated or sheltered in place.
White House aides pleaded for the president to call for a stop to the riots and condemn the violence Wednesday, and Trump issued a series of tweets in which he called for calm but did not overtly denounce the actions of his supporters.
After Biden’s win was certified by Congress early Thursday morning, Trump issued a statement through Dan Scavino, a top White House aide, acknowledging the end of his presidency and saying there would be an orderly transition of power.
“My only goal was to ensure the integrity of the vote. In doing so I was fighting to defend American democracy,” Trump said in Thursday’s video remarks of his efforts to overturn election results.
Republicans and current and former officials have rebuked the president’s behavior and called for him to issue a forceful condemnation of the riots as well as commit to an orderly transition of power.
At least seven administration officials have resigned their positions since Wednesday, including Transportation Secretary Elaine Chao, who announced plans to step down in protest effective Monday.
National