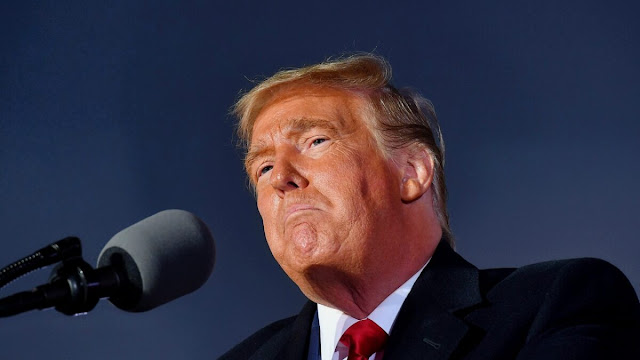 President Trump on Friday evening tweeted that next week's Georgia Senate runoff elections are “both illegal and invalid,” even as he has been seeking to convince voters to throw their support behind the GOP senators seeking reelection.
Trump began his series of tweets by reiterating his unsubstantiated claims of “massive corruption which took place in the 2020 Election, which gives us far more votes than is necessary to win all of the Swing States.”
The president specifically noted a Georgia consent decree that he claimed was “unconstitutional,” which he then claimed made both the two Senate races, as well as his own loss in the Peach State to President-elect Joe Biden, invalid.
The consent decree refers to a March agreement reached by state Democratic and Republican officials that provided voters an opportunity to fix ballots that contained an alleged mismatch between their signature as it appears on their ballot and a signature election officials have on file.
Trump and his allies have argued in multiple failed lawsuits that the consent decree was illegal because the decision did not involve state legislatures. However, as The New York Times reported, several groups have pointed out that Supreme Court rulings allow legislatures to delegate their authority to other state officials.
Trump is scheduled to hold a rally in Dalton, Ga., on Monday, one day before the Senate runoff elections, to encourage his supporters to turn out for GOP Sens. Kelly Loeffler and David Perdue, who are facing off against Democratic challengers Raphael Warnock and Jon Ossoff, respectively.
Even while campaigning for the GOP candidates, whose elections will determine which party controls the Senate, the president has continued to advance his unfounded allegations of voting irregularities and fraud in November, despite the Electoral College confirming Biden’s win last month.
Trump has taken aim at top election officials in Georgia, and on Wednesday called for Gov. Brian Kemp’s (R) resignation, tweeting that the governor is an “obstructionist” and attacking him for refusing to acknowledge that he won the presidential race in Georgia, despite Biden’s roughly 12,000-vote lead in the state.
Kemp dismissed Trump’s remarks, telling reporters that his top priorities were responding to the COVID-19 pandemic and reelecting Perdue and Loeffler.
“All these other things — there is a constitutional and legal process that is playing out, and I am very comfortable letting that process play out. But that horse has left the barn in Georgia and it’s headed to D.C. right now,” Kemp said of the presidential election.
“The next vote is going to be there, not here,” he continued. “So people need to be focused on the vote that is happening here, and that is right now in early voting and it will be on Tuesday.”
National