Trump and Pence meet for first time since Capitol riots 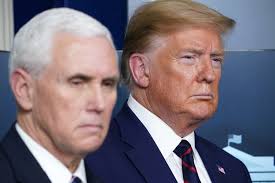 President Trump and Vice President Pence met in the Oval Office on Monday, marking the first time they have spoken since a mob of Trump supporters breached the Capitol Wednesday during the certification of electoral votes, forcing Pence and others in the building to be evacuated or taken to secure locations.
"The two had a good conversation, discussing the week ahead and reflecting on the last four years of the administration’s work and accomplishments," a senior administration official said.
The two men agreed that those who broke the law and stormed the Capitol last Wednesday "do not represent the America first movement backed by 75 million Americans."
Pence and Trump went several days without speaking as the president fumed that the vice president had not illegally intervened in the electoral certification to reject electors for President-elect Joe Biden.
National