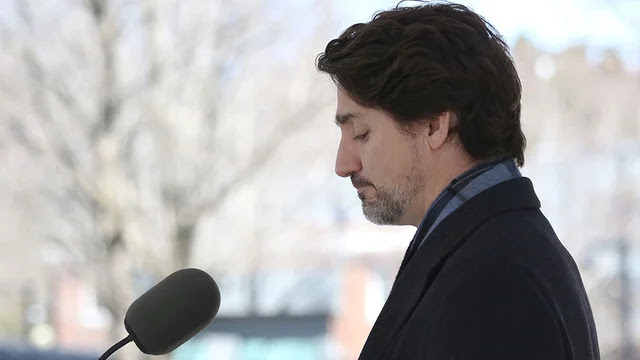 Canadian Prime Minister Justin Trudeau on Friday condemned President Trump for “inciting” Wednesday’s attack on the U.S. Capitol, which claimed at least five lives and interrupted the peaceful transition of power.
“What we witnessed was an assault on democracy by violent rioters incited by the current president and other politicians,” Trudeau said during a Friday news conference.
“As shocking, deeply disturbing, and frankly saddening as that event remains, we've also seen this week that democracy is resilient in America,” he continued.
Trump on Wednesday rallied thousands of his supporters in Washington, D.C., to march on the Capitol as Congress counted the votes of the Electoral College, urging them to show “strength” and refuse to accept his clear loss to President-elect Joe Biden. A mob of Trump supporters then overwhelmed Capitol Police, ransacked the Capitol, stormed toward the House and Senate chambers, and delayed the affirmation of Biden’s victory.
At least five people died, including a Capitol Police officer, and dozens were injured in the stunning riots. While Trump disavowed the rioters in a Thursday video, he had previously called them “special” and expressed his love for them in other posts on social media.
Trump has drawn considerable bipartisan backlash for riling up his supporters and months of pushing baseless conspiracy theories of widespread voter fraud and a coordinated Democratic Party effort to steal the election. Democratic congressional leaders are racing to impeach Trump for the second time in the wake of the attack, and several Trump administration Cabinet secretaries and officials have resigned after the riots.
While several foreign adversaries have also condemned Trump, Trudeau has delivered the strongest rebuke of the president from one of U.S.’s closest allies.
U.S.-Canadian relations have deteriorated throughout the Trump administration, primarily by Trump’s trade policies. The president in 2018 levied tariffs on steel and aluminum imported from Canada through a law meant to protect national security, effectively declaring one of the U.S.’s closest military partners a threat to his ability to defend the country.
Despite Trudeau's strained relationship with Trump, he had previously avoided criticizing the president's handling of domestic issues.
When asked in June to condemn Trump’s decision to deploy federal security forces to break up peaceful protests over police brutality, Trudeau paused for nearly 20 seconds before sidestepping the question with calls for unity and empathy.
World