The end of Trump's presidency and political career 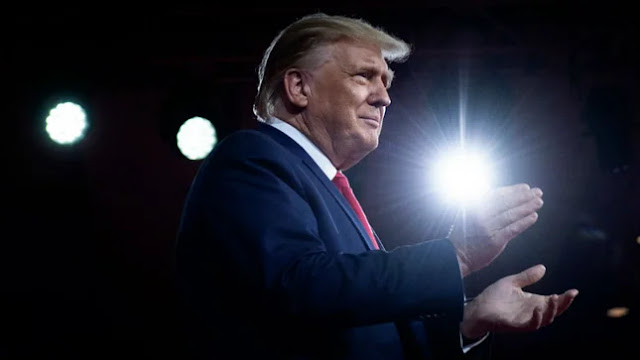 And just like that, the controversial, combustible and sometimes brilliant political career of Donald J. Trump comes to an end.
Trump’s presidency will now go down as a misguided experiment, a cautionary tale about the cult of personality and the riskiness of electing an outsider.
It is a tragedy because, among other accomplishments, Trump inspired and mobilized tens of thousands – maybe hundreds of thousands – of people who had given up on voting, given up on our democratic process, because they felt no one spoke for them.
Rust Belt workers whose jobs had been sent overseas, struggling small business owners whom President Obama told “You didn’t build that,” the commonsense Americans who deplored the steady advance of the welfare state and the left’s undermining of traditions and patriotism; all those folks – and more – welcomed Donald Trump’s promise to “drain the swamp.”
From the start, Trump called out the country’s massive bureaucracy and entrenched interests; in 2016, running a mostly self-funded campaign, he owed no one and could take on everyone. And he did.
Trump challenged the conventional wisdom about nearly everything and refused to kowtow to the elites who run our major news organizations, think tanks, universities and large corporations. He bucked the conventional wisdom on trade, on climate change, on dealing with our allies and enemies and on immigration. He broke barriers by meeting with North Korea’s Kim Jong Un, forged new alliances in the Middle East and offended our NATO partners by demanding that they live up to their commitments.
Little did he know just how risky it is to take on the establishment.
From day one, Trump encountered significant opposition, not only from Democrats but also from many members of his own party and from parts of the intelligence and law enforcement organizations that worked to undermine his administration. The nation spent over two years engrossed in the fruitless Russia-gate investigation, with Democratic politicians and major media figures lying to the public about President Trump’s connections to Russia.
Chuck Schumer (D-N.Y.), minority leader in the Senate, took advantage of every available rule to delay even the most unimportant nominations to Trump’s administration. House Speaker Nancy Pelosi (D-Calif.) put Reps. Jerry Nadler (D-N.Y.) and Adam Schiff (D-Calif.), among the most bitterly partisan members of her House, in charge of impeaching the president, further tearing the nation apart for political purposes.
Some in the media dropped any pretense of neutrality. In the run-up to the November election, major news outlets published only favorable news about Joe Biden and hid from the public significant revelations about Hunter Biden’s questionable business activities.
Our social media giants climbed aboard, censoring the president and dictating to the public what could or could not be said about the Hunter Biden scandal.
Notwithstanding three years of incessant “resistance,” Trump ran up numerous successes. He shepherded a significant tax cut through Congress, he renegotiated major trade deals including NAFTA and he confronted China in a long-overdue effort to reset our relations with that hostile country.
Trump helped spur a major increase in our energy output and bullied our southern neighbors into helping to stem the flood of people entering the country illegally. He pushed for school choice, appointed over 200 judges to federal courts and three to the Supreme Court and presided over an economy that, before COVID-19 struck, had lifted incomes and opportunities for most Americans.
But Trump’s erratic and confrontational personality brought on some significant failures as well. Indeed, his four years were bookended by major defeats of his own making.
He picked fights with everyone; some of those skirmishes were deplorable, such as his set-to with the late Sen. John McCain (R-Ariz.), a war hero demeaned by the president. That bitter contretemps led McCain to deep-six an important Republican health care bill. McCain had campaigned on delivering an overhaul of ObamaCare. But instead of voting with his colleagues and providing the president a critical win, the Arizona senator famously sent the bill to defeat.
In the congressional elections of 2018, the Republicans’ failure to replace ObamaCare, after years of promising a better alternative, helped lead to substantial losses.
More recently, Trump’s public quarreling with Georgia’s Gov. Brian Kemp and Secretary of State Brad Raffensperger over alleged voter fraud in that state contributed to the defeat of GOP Senate candidates Kelly Loeffler and David Perdue. Exit polling shows that many Republicans in the state who believed Trump’s claims boycotted the run-offs on January 5, denying the turn-out needed to keep the Senate in GOP hands.
The darkest day of the Trump presidency, however, occurred yesterday when hundreds of loyalists stormed the Capitol Building in Washington, violently confronting the police and causing one woman’s shooting death. Tens of thousands had turned up to show their support.
Trump hoped that GOP senators would vote not to confirm the results of the Electoral College count on December 14, or that Vice President Mike Pence would unilaterally rule the November 3 outcome illegitimate. His supporters became angry that neither of those things appeared likely to happen, and swarmed the Capitol.
President Trump, who asked his supporters to go home but also continued to fuel their anger over the election outcome, will not recover from these events. Many who had accepted the president’s combative personality as the price to be paid for his successful policies will have had enough. Indeed, his defeat by the uninspiring Joe Biden in the November election suggests that a good number of GOP voters had already reached that tipping point.
There will be a core group of loyal Trump supporters who will make excuses for recent events; the number will shrink as he leaves office, and enthusiasm for his ongoing leadership of the Republican Party will decline. There are plenty of GOP legislators eager to fill his shoes; those folks will do their best to hasten Trump’s decline.
Opinion