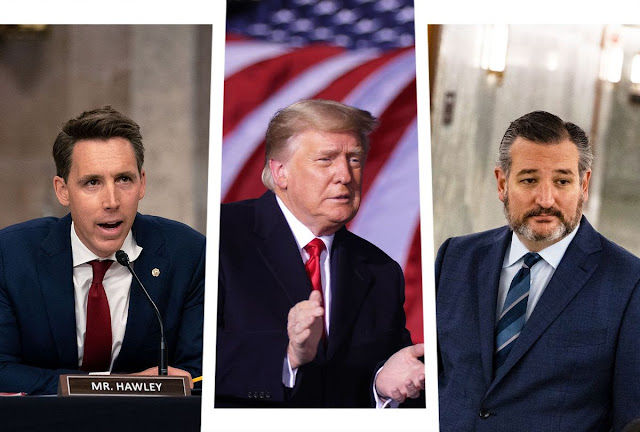 Senators Ted Cruz and Josh Hawley did not spread crazy conspiracy theories about Dominion voting machines. They didn’t say that Trump had actually won reelection, let alone in a landslide. They didn’t say Trump won any of the states that went to Biden, or that rampant voter fraud had put the Democrats over the top. They didn’t say Brad Raffensperger had failed in his job.
But they didn’t deny any of these falsehoods either, even as President Trump and other allies of his were eagerly spreading them. They advanced a different case. There were widespread doubts about the election that needed to be allayed, they said. There were some solid ground, they added, for such doubts, raising specific issues such as the legal propriety of the Pennsylvania legislature’s liberalization of absentee voting. To listen to Hawley’s speech in the Senate the night of the riot, you would have thought the marchers were just people who got carried away by their fervor for following the Pennsylvania state constitution.
The senators probably reasoned that they had found a political and moral sweet spot: They weren’t saying anything false, what they were saying was (somewhat) defensible on the merits, and they would win credit from some of Trump’s most fervent supporters, and from the president himself. They were, they might even have thought, channeling those supporters’ feelings in a better direction than the president.
To think through the choice Cruz and Hawley made, consider an alternative course they could have taken. They could have actually rebuked Trump for his poisonous fantasies, acknowledged that Biden had won, and said that they were going to object to some states’ certifications because of the legal issues they had identified. In that case, their conduct would have still deserved criticism: Following, and building on, the Barbara Boxer precedent was not something Republicans should do. But the argument they made — that pro forma objections to certification have already become part of our politics, with no serious pushback from Democrats, and Republicans should not be judged more harshly for participating in the trend — would have had some weight.
But they would have deserved a lot less criticism than they have gotten, and I think they would have received a lot less too. The flipside is that they would have had to give up the reward they were after, too, and might well have faced the wrath of Trump and those core supporters.
Instead, they chose a course that they had to know would be interpreted by the fantasists as their full agreement: as support for the proposition that Trump had been cheated out of reelection, that there was a real prospect to “stop the steal,” and that other Republicans were just being weak when they refused to take action. Throughout the debate, and even now, Hawley has been saying that he has spoken for the doubting millions. But he hasn’t, really: He hasn’t spoken for the Republican voters who think Trump won in a landslide, or that George Soros had cheated them out of their rightful president.
Bret Baier zeroed in on just this gap between the senators’ words and their obvious context when he asked Hawley whether his challenge to the election results would keep Trump in office. Hawley wouldn’t say yes and wouldn’t say no — but by asking the question, Baier got him to go as far as to say that who took office would depend on what Congress did. As Baier immediately pointed out, that wasn’t really true.
I think I understand why the senators thought what they were doing was defensible. But they were grievously wrong. They were walking a tightrope and fell off, and not just politically.
Opinion