Some thoughts on the passing of Hank Aaron 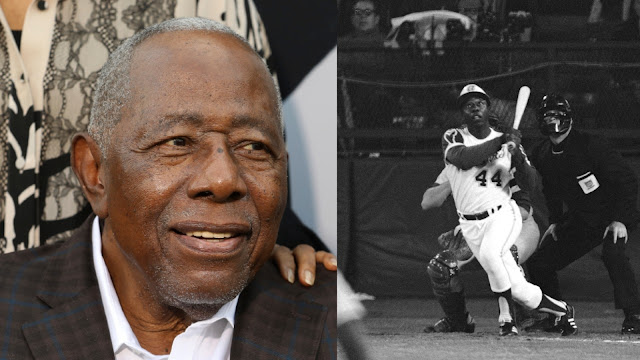 Henry Aaron has died at 86, bringing to a close one of baseball’s great and remarkable lives. Aaron’s 23-year major league career was, for many years, reduced to “755 home runs” — an impressive statistic, but one that misses much of what Aaron did on the field. He was a complete ballplayer — won two batting titles, stole as many as 31 bases in a season, was a fine right fielder, played for a division champ in 1969, a pennant winner in 1958, a World Champion in 1957, and batted .362/.405/.710 in his three trips to the postseason.
There are a series of what I call the “baseball virtues,” not always possessed (as in Aaron’s case) by virtuous men: consistency, durability, effort, growth over time. Aaron had all of them. After a broken ankle while sliding that prematurely ended his rookie season, Aaron did not miss significant time to injury again; he made a minimum of 634 plate appearances every year from age 21–35, averaging 154 games a year. He never had an off year, not until he was 41 and washed up. Over a 19-year span from 1955–73, he batted .312/.380/.574, averaging 105 runs scored, 109 RBI, 37 home runs, walking more than he struck out, with an OPS+ (park-adjusted on base plus slugging compared to the league average, set at 100) of 162, 7.3 Wins Above Replacement a year. Aaron was not a burly slugger but a man with incredibly quick hands; teammate Joe Adcock said that “trying to sneak a fastball past Hank Aaron is like trying to sneak the sunrise past a rooster.”
To a certain extent, the soft-spoken Aaron snuck up on baseball, overshadowed by others. That may seem a strange thing to say of a man who won an MVP Award on a World Championship team at age 23, but Warren Spahn and Eddie Mathews were the team’s bigger names then, with longer tenures and big star-making seasons before Aaron arrived, and in his prime, he could never compete with the charisma of Willie Mays or the mystique of Mickey Mantle. Because Aaron played in a pitcher’s park in a pitcher’s era in his prime, he never hit 50 home runs in a season (he hit 26 longballs on the road in 1957, 27 in 1962, 25 in 1963), but he got those home runs back when the Braves moved from Milwaukee to Atlanta’s “Launching Pad” in 1966. As I wrote in 2007, ranking Aaron’s career total bases record of 6,856 as the game’s twelfth-most-impressive record: “Aaron’s homer record may be under siege, but his career total bases record, held by a margin of some 700 over Stan Musial and nearly a thousand ahead of #4 Barry Bonds, remains safely out of reach. Aaron had 3771 hits, 98 triples and 624 doubles to go with 755 HR. To do that required durability (15 straight seasons of over 600 plate appearances, 19 straight of over 500, and the first year he fell short he still hit 40 homers), consistency, tremendous power and a good batting average.”
Chasing the hallowed home-run record in the Deep South from 1966–74, through the heart and tail end of the tumultuous civil-rights era, brought an increasing burden on Aaron, who was deluged with hate mail and death threats (Charles Schulz satirized the hate mailers by having Snoopy chase the record at the same time in Peanuts). Coming from humble beginnings in Alabama, Aaron was no stranger to the racism of that time and place, and he never lashed out during his playing days, but it wore on him.
I remember when he was inducted in the Hall of Fame in 1982, and after an interminable speech from Happy Chandler and a fairly long one from Frank Robinson, Aaron took the stage in the broiling heat — everybody was melting, even his Alabaman parents — Aaron was mercifully brief, and devoted much of his heartfelt remarks just to thank-yous. I don’t know if he cut more of what he intended to say, or was just averse to going on about himself at length. Aaron became more outspoken on racial issues after his retirement.
In his final public service two weeks ago, Aaron publicly rolled up his sleeve to take the COVID vaccine:
Baseball Hall of Famer Hank Aaron, former U.N. Ambassador and civil rights leader Andrew Young and former U.S. Health and Human Services Secretary Louis Sullivan got vaccinated against COVID-19 in Georgia on Tuesday, hoping to send a message to Black Americans that the shots are safe. Getting vaccinated “makes me feel wonderful,” Aaron told The Associated Press. “I don’t have any qualms about it at all, you know. I feel quite proud of myself for doing something like this. . . . It’s just a small thing that can help zillions of people in this country.” Rolling up their sleeves to take the first of two doses, these octogenarians, their spouses and several other civil rights leaders who received the shots in a brand-new health clinic at the Morehouse School of Medicine acknowledged the legacy of mistrust that many African Americans have toward medical research, stemming from the infamous Tuskegee experiment in which U.S. health workers left syphilis untreated in Black men without their consent, making them suffer needlessly.
Rest in peace.
Opinion