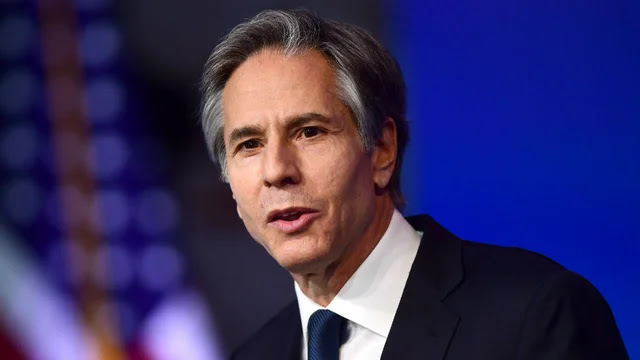 The Senate confirmed Antony Blinken to be President Biden’s Secretary of State, the fourth in the line of succession to the presidency, who Biden has tasked with leading the effort to bring the U.S. back to the global stage and rebuild alliances that suffered under the Trump administration.
The Senate voted 78-22 for Blinken’s confirmation, making him the 71st secretary of State and the fourth member of Biden’s Cabinet to be confirmed.
Treasury Secretary Janet Yellen was confirmed on Monday while Secretary of Defense Lloyd Austin and Director of National Intelligence Avril Haines were confirmed last week.
Blinken’s confirmation vote comes as the Senate is set to begin deliberations over the second impeachment trial against former President Trump, in which Senate leaders have worked to balance the trial of the former president over the need to confirm Biden’s Cabinet picks.
Trump was impeached in the House last week on one article of inciting an insurrection related to the deadly attack on the U.S. Capitol by a mob of his supporters on Jan. 6 in an effort to overturn Congress's official Electoral College count affirming Biden as the winner of the presidential election.
Blinken assumes leadership at the State Department amid Biden’s commitment to bring the U.S. back to the global stage by strengthening alliances and America’s involvement in multilateral institutions that Trump criticized and withdrew U.S. participation from.
He’s also tasked with increasing morale at the State Department that Democrats say has suffered greatly under the Trump administration with the departure of experienced professionals in leadership roles, vacancies of senior positions, personal attacks on diplomats and staff and unaddressed reports of political retaliation against career employees.
“The State Department is suffering from a historic crisis stemming from low morale, the departure over the past four years of many of our most experienced diplomats and the lack of accountability for the political leadership at top over the last four years,” said Sen. Bob Menendez (D-N.J.), the incoming chairman of the Senate Foreign Relations Committee.
“Mr. Blinken’s experience and expertise is necessary to begin to repair the damage and rebuild the state department," he added.
Senate Majority Leader Charles Schumer (D-N.Y.), who spoke ahead of Blinken’s confirmation vote, offered support for Blinken as the “right person” to lead the department in the post-Trump years.
“Mr. Blinken is just the right person to rebuild and reassert America’s national security prerogatives on the global stage and reestablish the first instrument of American power: diplomacy,” Schumer said on the floor.
“For four years the failed diplomacy of the Trump administration weakened our alliances, strengthened and emboldened our adversaries and tarnished America’s reputation abroad,” Schumer said.
Blinken served as deputy secretary of State during the Obama administration and is a longtime adviser to Biden, having served as staff director of the Senate Foreign Relations Committee when Biden was chairman. Blinken also served in senior positions on the White House’s National Security Council when Biden was vice president.
In addition to his own service, Blinken’s father served as the U.S. ambassador to Hungary, his uncle as U.S. ambassador to Belgium and his wife as assistant secretary of State for educational and cultural affairs during the Obama administration.
Blinken counts this, and his family history of finding refuge in the U.S., as inspiring his commitment to public service. His grandfather fled pogroms in Russia, his grandmother fled Communist Hungary and his stepfather survived the Nazi concentration camps.
During his confirmation hearing last week, Blinken committed to cooperating more closely with Congress on U.S. foreign policy decisions and further said increasing diversity at the State Department is one of his most primary responsibilities, committing to the president’s push for promoting racial and gender equity.
“I will view it as a significant measure of whether I succeeded or failed, however long I'm in the job, whether or not we have finally put in place the real foundations to make sure that we have a workforce and State Department that looks like the country it represents,” Blinken said during his confirmation hearing last week.
The newly confirmed secretary is tasked with taking a stronger position against adversaries like China, Russia and North Korea and navigating a pathway to diplomacy with Iran over its nuclear program that Republicans oppose and senior Democratic leaders are cautious about.
Menendez offered full-throated support of Blinken’s confirmation but had earlier raised his “fear” over the Biden administration’s pursuit of rejoining the Iran nuclear deal that Trump withdrew from in 2018, if it fails to address Tehran’s other malign activity.
Sen. James Risch (R-Idaho), the current chairman of the Senate Foreign Relations Committee, said he supported Blinken’s confirmation despite being on opposite sides of the issue with Iran.
“Iran is a very wide disagreement that we have. In my judgement the JCPOA [Iran nuclear deal] was a colossal failure and a real blunder for American policy overseas. In talking with Mr. Blinken, he does not share that view,” Risch said in his remarks on the Senate Floor.
“Again, this is one issue out of the many, many issues we discussed. There was very little, in fact no daylight between us on some of them," he added.
Yet Republicans largely offered support to Blinken’s confirmation and offered cooperation on areas of agreement and engagement on conflicts.
National World