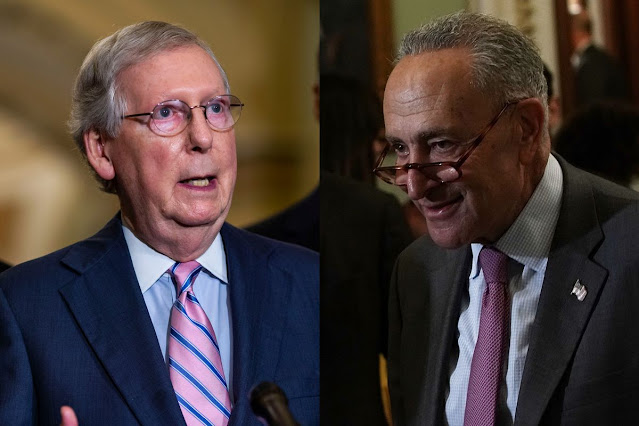 Senate Majority Leader Charles Schumer (D-N.Y.) on Thursday warned that Democrats were willing to go it alone on the next coronavirus relief package, potentially starting the process as soon as next week.
Schumer, speaking from the Senate floor, said that it was the "preference" of Democrats to work with Republicans on a sixth coronavirus relief package, but that if GOP senators wanted to move too slowly, or go smaller than Democrats think necessary, they will move more aid without GOP support.
"The dangers of undershooting our response are far greater than overshooting ... so the Senate as early as next week will begin the process of considering a very strong COVID relief bill," Schumer said from the Senate floor.
He added that if Republicans "decide to oppose this urgent and necessary legislation, we will have to move forward without them."
"We have a responsibility to help the American people fast, particularly given these new economic numbers. The Senate will begin that work next week," Schumer continued.
To pass more coronavirus relief without Republican support, Democrats will need to use reconciliation, a budget process that lets some bills bypass the 60-vote legislative filibuster.
Democrats would first need to pave the way by passing a budget resolution that provides instructions to committees for drafting legislation.
Sen. Dick Durbin (D-Ill.), Schumer's top lieutenant, told reporters on Thursday that Democrats are considering taking up the budget resolution next week "as a very real possibility," but stressed that no final decisions have been made.
"I don't believe that's been finally decided, but I believe that's at least the ambition," Durbin said.
Schumer told Democrats on a conference call on Tuesday that they should be prepared to vote on that budget resolution as soon as next week.
"In keeping our options open on our caucus call today I informed senators to be prepared that a vote on a budget resolution could come as early as next week," Schumer said on Tuesday.
Democrats want to pass more coronavirus relief before beefed-up unemployment benefits expire in March. The Senate will also need to juggle passing legislation with former President Trump's second impeachment trial that will start the week of Feb. 8.
As Democrats appear poised to pass coronavirus relief with a simple majority, Republicans in a bipartisan Senate group appear frustrated that they could be sidelined.
The bipartisan group had a call with the White House last weekend and GOP senators said that the administration had provided them with data about their $1.9 trillion coronavirus plan.
"I think it would be wise for the new administration to work to try to get a bipartisan proposal that can be moved. ... We're giving an opportunity to come together on important and timely legislation so why wouldn't you do that rather than trying to move it through with reconciliation and having a fully partisan product," Sen. Lisa Murkowski (R-Alaska), a member of the group, told reporters.
Durbin, a member of the bipartisan group, said there was another call with the bipartisan group last night during which two GOP senators said Biden had called them to discuss coronavirus relief.
"I think there's been direct personal outreach by the president to these Republicans," Durbin said.
Durbin added that he is willing to consider making changes to pieces of Biden's proposal if Republicans guaranteed that they would vote for the bill if their ideas were incorporated.
"There are certain aspects that I think should be reconsidered. ...You can take the $1.9 trillion package and identity elements within that might be subject to revision or amendment so long as Republicans are telling us 'and with those changes, we'll support you,' " Durbin said.
National