Schumer declares he will be Senate majority leader 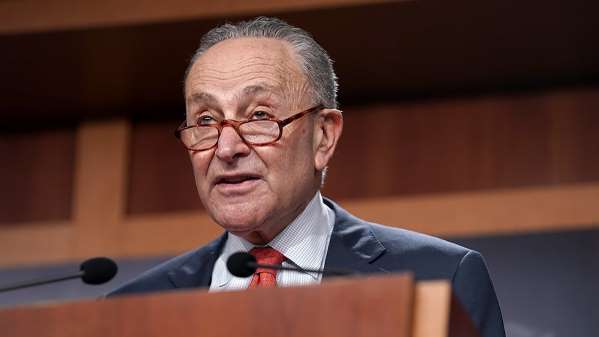 Senate Democratic Leader Charles Schumer (N.Y.) on Wednesday declared himself Senate “majority leader” and asserted that Democrats have regained control of the Senate even though one of two Senate runoff races in Georgia has yet to be called.
“It feels like a brand new day. For the first time in six years, Democrats will operate a majority in the United States Senate — and that will be very good for the American people,” Schumer said in a statement released Wednesday morning even as the race between Democrat Jon Ossoff and incumbent Republican David Perdue is still undetermined.
Anticipating control of the White House and both chambers of Congress, Schumer signaled that Democrats plan on passing another major coronavirus relief package soon, promising “help is on the way.”
“America is experiencing one of the greatest crises we have ever faced, and the Senate Democratic Majority is committed to delivering the bold change and help Americans need and demand. Senate Democrats know America is hurting,” he said.
Schumer also thanked “everyone in Georgia and across the country who volunteered their time, donated what they could, and worked so hard to elect new leadership in Washington."
The Democratic leader promised to work closely with the Biden administration.
“As majority leader, President-elect Biden and Vice President-elect Harris will have a partner who is ready, willing and able to help achieve a forward-looking agenda and deliver help and bold change to the American people,” he said.
Speaker Nancy Pelosi (D-Calif.) on Wednesday morning also declared victory in both Georgia races.
“Now, because of the courageous leadership of Georgians, America will have a Democratic Senate working hand-in-hand with our  Democratic House majority and President-elect Joe Biden and Vice President-elect Kamala Harris,” she said in a statement.
Pelosi highlighted coronavirus relief legislation as a top priority.
“We will pursue a science and values-based plan to crush the virus and deliver relief to struggling families, safeguard the right to quality affordable health care and launch a plan to Build Back Better powered by fair economic growth,” she said.
Democrats at a minimum will control 49 seats after Rev. Raphael Warnock defeated Sen. Kelly Loeffler (R-Geo.) in a runoff special election to serve the rest of retired Sen. Johnny Isakson’s (R-Ga.) term.
Even with Democrats in control of the Senate agenda, they still need significant bipartisan support to move legislation unless they use a special budgetary process known as reconciliation to move bills with simple-majority votes. But that special pathway is reserved for legislation that directly impacts revenue, spending or the federal deficit.
Almost all controversial legislation needs to overcome a 60-vote procedural threshold to cut off debate and proceed to an up-or-down vote in the chamber.
Ossoff is leading Perdue by just more than 16,000 votes with an estimated 98 percent of the vote tallied. He declared victory Wednesday, though The Associated Press has not yet called the race.
Ossoff said in a video message shared on social media platforms that passing COVID-19 relief would be his top priority.
“I want to thank the people of Georgia for participating in this election,” he said. “Whether you were for me or against me, I will be for you in the U.S. Senate.”
Neither Loeffler nor Perdue, whose term expired earlier this week, have conceded their races.
Loeffler early Wednesday morning said she won’t concede until her team makes sure “that every vote is counted.”
“We have a path to victory and we’re staying on it,” she said.
National