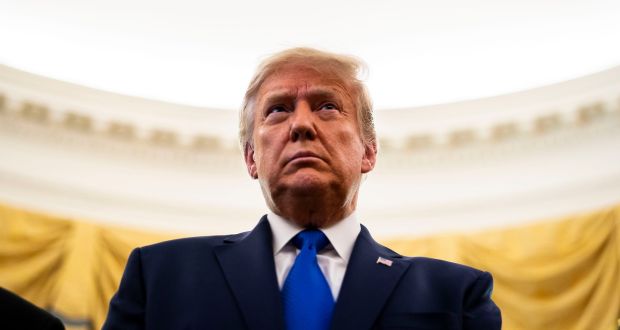 President Trump has become officially toxic. And we're not just talking about to Democrats or traditional media (that's been the case since June 2015), but to a Republican establishment looking ahead to 2022 and 2024 with a real chance to take back power in the House, Senate and White House.
The toxicity is exemplified by the House Republicans who joined Democrats in impeaching the president over his decision to hold a rally on the same day the 2020 presidential election certification was held, and before rioters stormed the Capitol in a sickening, shocking, deadly siege that left five people dead, including a police officer. A "genuinely furious" Senate Majority Leader Mitch McConnell (R-Ky.) is reportedly also seriously considering voting for Trump to be removed during a Senate trial that will likely occur after the 45th president has exited the White House.
For Republicans, this was a defining moment that could make or break their political careers. A calculation with an answer as clear as mud was made: Ditch Trump, and therefore (possibly) many of his supporters, or vote against impeachment or conviction.
Trump would have been the favorite to capture the 2024 GOP nomination pre-riot (a 74 million-vote head start and overwhelming media coverage would have been impossible for any of the competition to overcome). But now it is almost a certainty he will not run, having lost major support in the party and any and all access to social media, which allowed him to communicate directly with his 89 million followers on Twitter.
If you're the kind of fence-sitter voter that decides elections in swing states, when you think Trump, you think Capitol Hill riots. Full stop. The images and sounds from the rampage are just too ugly and unbelievable to erase. Proof: Quinnipiac currently has Trump's approval at 33 percent, down 11 points from December. Politico/Morning Consult has the president at just 34 percent, including just 29 percent support from independents. For context, President Obama's approval was 59 percent in Gallup on the day Trump was inaugurated. Translation: Trump is toast politically outside of his core base.
And therein lies the rub: That core base – the MAGA wing – is substantial. They loathe the establishment. Democrats, sure. The media, absolutely. But Republicans get a special sense of ire because many are seen as betraying Trump.
But as Trump dims from the spotlight without social media to stay on the radar, assuming he doesn't start his own TV network with him as its 8:00 pm host, perhaps the GOP can have a rebirth as the opposition party again. It's popularity – thanks to the Tea Party movement that was born shortly after Obama's election – was quite high leading up to the 2010 terms, resulting in a whopping 63 seats changing hands from Republican to Democrat in giving the GOP the House. Republicans would go on to capture the Senate in 2014.
The same kind of scenario could play out in 2022. The GOP needs only a handful of seats to take back the House. Given how poorly things have gone for the party in power in midterms in modern times, that shouldn't be a problem. The Senate is also in play, with the Red Team only needing to flip one seat to take back a majority.
So, while things look dark for the party now, just remember covers like these from Time magazine in 2009, one year before the GOP overwhelmingly took the House.
And also remember: The U.S. is basically a center-right country no matter how much many in traditional media try to portray it otherwise. A 2020 Gallup survey found that 37 percent of American voters identified as conservative, 35 percent said they were moderate and 24 percent as liberal. Exit polls following the 2020 election tracked almost exactly along those lines.
The Biden administration will also have to, you know, govern and perform. Blaming Trump – the way Obama blamed Bush for eight years – will be a tactic that should get old in a hurry given the temperature in the country. And the incoming president may not even seek a second term, leaving the mantle to Vice President-elect Kamala Harris, who failed to connect with voters during the presidential primaries to the point that she didn’t even survive to see Iowa.
Breaking up with Trump will be hard to do. But having him cast a shadow over the GOP for the next few elections is decidedly worse given how radioactive the Capitol Hill riots have made him politically.
Conservatives and moderates will have plenty to get fired up about without Trump leading the charge while holding the bullhorn: Tax increases, possible expansion of the Supreme Court and Senate, abolishing the filibuster, abolishing ICE, reallocation of police funds, the continued expansion of Chinese dominance, Big Tech censorship.
And with fierce opposition of those initiatives coming to the forefront, and as Trump fades, the death of the Republican Party will once again have been greatly exaggerated.
Opinion