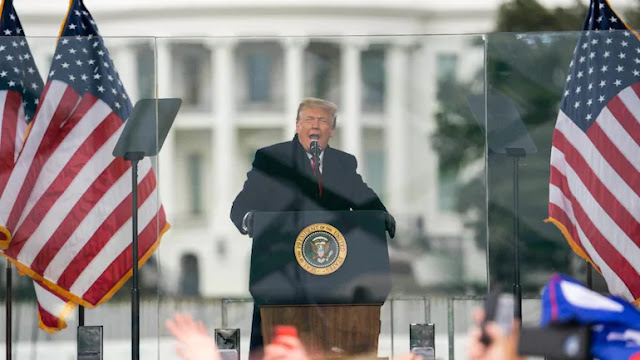 House Republicans on Monday blocked a request by Democrats to unanimously pass a resolution calling on Vice President Pence to invoke the 25th Amendment and remove President Trump from power after he incited a mob of his supporters to attack the Capitol last week.
During a brief session on the floor, Majority Leader Steny Hoyer (D-Md.) asked that the resolution, authored by fellow Maryland Democratic Rep. Jamie Raskin, a constitutional scholar, be passed unanimously. The resolution calls on Pence to “convene and mobilize” the Cabinet, declare Trump unfit to carry out his duties, and vote to strip the president of his powers under Article 4 of the 25th Amendment.
Rep. Alex Mooney (R-W.Va.) objected to Hoyer’s request. Mooney, a Trump ally who has repeated the president’s unsubstantiated claims of widespread voter fraud, said he opposed Democrats rushing to pass a “resolution of this magnitude” with no debate.
“Speaker Pelosi should not attempt to adopt a resolution of this magnitude without any debate on the floor of the U.S. House of Representatives. It is wrong to have sent members of Congress home and then try to adopt without any debate a precedent-setting resolution that could imperil our Republic,” Mooney said in a statement.
“The U.S. House must never adopt a resolution that demands the removal of a duly elected president, without any hearings, debate or recorded votes.”
After the exchange on the floor, Hoyer told reporters that the full House will vote on the rule for the resolution Tuesday and vote for final passage on Tuesday evening. That would force Republicans to go on record three times opposing the 25th Amendment resolution, Democrats said.
Speaker Nancy Pelosi (D-Calif.) repeatedly has said that she favors Pence invoking the 25th Amendment to quickly remove Trump after Wednesday’s deadly insurrection. But with Pence unlikely to pursue that course, Democrats are plowing ahead with impeaching Trump for a second time.
They introduced a single article of impeachment, accusing Trump of inciting a violent insurrection to stop Congress’s certification of Joe Biden’s victory. Hoyer said that fast-tracked vote — making Trump the first president in history to be impeached twice — could come as soon as Wednesday.
National