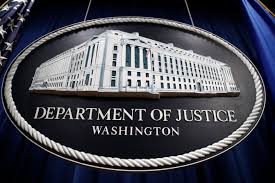 Federal prosecutors Friday night announced the first conspiracy charges against members of the Proud Boys over the group’s role in the deadly Jan. 6 riot in the Capitol.
Prosecutors said in a news release that two members of the far-right “Western Chauvinist” group conspired to obstruct law enforcement officers’ efforts to protect the Capitol from the mob. The members, Dominic Pezzola of Rochester, N.Y., and William Pepe of Beacon, N.Y., had already been charged with lesser offenses from their activities on Jan. 6.
The new charges represented a substantial step up in prosecutors’ actions against Proud Boys members. More than 170 people have been charged over the riot, though most have been over minor allegations such as disorderly conduct and unlawful entry.
Conspiracy charges were also previously announced against three members of the militia group the Oath Keepers over their alleged role in the chaos on Capitol Hill.
Prosecutors said Pezzola and Pepe “engaged in a conspiracy to obstruct, influence, impede, and interfere with law enforcement officers engaged in their official duties in protecting the U.S. Capitol and its grounds on Jan. 6, 2021.”
“It is alleged that Pezzola and Pepe took actions to evade and render ineffective the protective equipment deployed by Capitol Police in active riot control measures, including actions to remove temporary metal barricades erected by the Capitol Police for the purpose of controlling access to the Capitol Grounds, and the stealing and purloining of property belonging to Capitol Police,” the Justice Department said in the press release.
Pezzola is also said to have ripped away a Capitol Police officer riot shield while the officer was trying to push back the rioters. Files retrieved when FBI agents raided his home indicated he had been examining “Advanced Improvised Explosives,” “Explosive Dusts” and “Ragnar’s Big Book of Homemade Weapons.”
Michael Scibetta, Pezzola’s lawyer, told The New York Times Friday night that he had not yet seen the new conspiracy charges and that he was being barred from seeing his client.
“The matter is evolving,” Scibetta said.
The Proud Boys gained national prominence after videos circulated of members engaging in violent street fights with members of Antifa, the loose collection of anti-fascist agitators. Their profile only grew when former President Trump declined to explicitly condemn them at a presidential debate, saying “stand back and stand by,” a remark the group interpreted as one of support.
They’ve drawn the scrutiny of prosecutors after videos showed members attended the riots that led to the deaths of several people.
At least four other members of the Proud Boys have been charged thus far over the insurrection, which unsuccessfully sought to stop Congress’s certification of the Electoral College results showing Trump losing to now-President Biden.
National