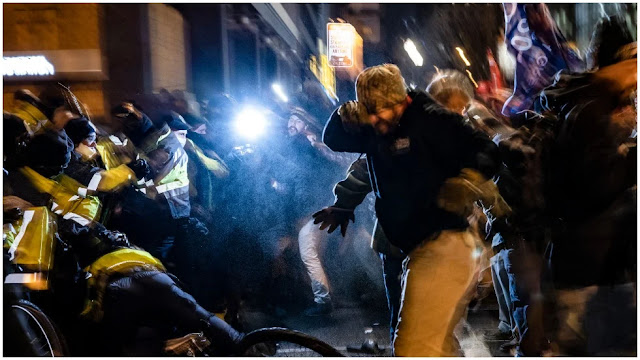 Police in Washington, D.C., clashed with protesters late Tuesday night during a demonstration in support of President Trump near the White House.
Police said they made six arrests as of 9 p.m., NBC News reported, charging several individuals with multiple offenses including carrying firearms without a license, possession of unregistered ammunition and possession of an unregistered firearm. Some demonstrators were also charged with assaulting a police officer, the network reported.
Photos and videos taken near the city's newly minted Black Lives Matter plaza show police using pepper spray on demonstrators, some of whom are seen shoving officers and screaming at them.
Several people appeared to be injured or bleeding as a result of the clash just north of the White House grounds.
Hundreds gathered for an event dubbed "March for Trump/Save America" earlier in the day, with thousands more expected to gather near the Capitol on Wednesday ahead of Congress's counting of the Electoral College vote.
D.C. police and federal authorities have said in recent days they are monitoring the presence of extremist groups among the crowds expected to attend demonstrations in the nation's capital this week. The National Guard has been deployed in the district as a precaution.
Earlier in the week, the leader of the Proud Boys, an extremist hate group, was arrested by D.C. police and charged with vandalism of a historically Black church in the city during an earlier protest.
National