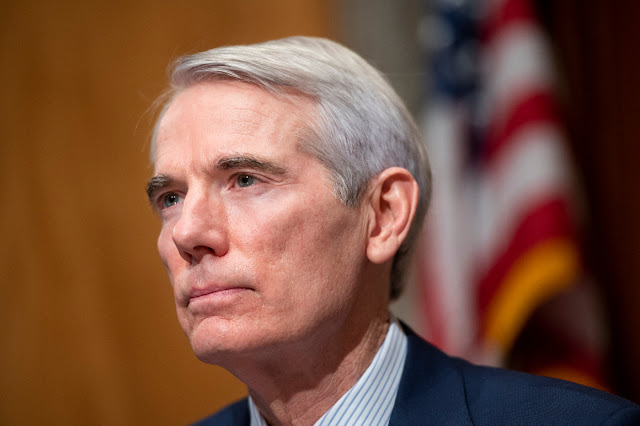 The surprise retirement of Sen. Rob Portman (R-Ohio), a high-profile moderate who is close to the Bush family and Senate Republican Leader Mitch McConnell (Ky.), is the latest sign of turmoil in the Republican Party as it wrestles with its identity in the post-Trump era.
On the day that Democrats walked an article of impeachment to the Senate and Republicans wrestled with questions about former President Trump’s trial and the future of their party, Portman acknowledged feeling out of step with today’s political climate.
“Our country is polarized right now. It’s kind of shirts and skins, isn’t it? That makes it more difficult to find that common ground because elected officials aren’t rewarded for that,” he said at a press conference announcing he would leave the Senate at the end of 2022.
“What they’re rewarded for is throwing out the red meat on a talk show. That isn’t conducive to solving the serious problems we face as a country,” said Portman, a veteran of the Bush White House whose pro-trade, pro-business brand of Republicanism sometimes conflicted with Trump’s “America First” nationalism.
Portman generally downplayed the influence of today’s politics in discussing his retirement, but his decision was interpreted across Washington as another sign of a rapidly evolving GOP that is wrestling with whether to a be a party of Trump, or a party more similar to the one that existed before Trump’s rise.
Jeff Sadosky, a former senior aide to Portman, said his former boss appears to feel less comfortable in a Republican Party that has become increasingly molded by the extreme rhetoric and bruising style of the Trump era.
“I think it’s a sign that the party is focused on those with the biggest mouths, not those with the best plans,” he said.
The Senate will vote in February on whether to convict Trump on the House article of impeachment accusing him of inciting a mob that attacked the Capitol on Jan. 6.
A conviction would require 67 votes, meaning at least 17 Republicans would need to join every Democrat. That’s seen as highly unlikely in an environment where anyone crossing Trump risks crossing his supporters and taking on a tough primary challenge.
Republican strategists and political observers speculated Monday that Portman may have wanted to avoid the chances of facing a more pro-Trump Republican primary challenger, such as firebrand Rep. Jim Jordan (Ohio).
“It sounded to me like he is worried about the crosscurrents headed into 2022. He knows that Trump still has a strong hold on the Republican Party and Portman would probably face a primary challenge and he may not want the aggravation,” said Darrell West, the director of governance studies at the Brookings Institution.
Portman acknowledged feeling pressure on both sides as the Senate prepares for Trump’s second impeachment trial, with some constituents asking why he isn’t more outspoken in his criticism of Trump and others demanding to know why he isn’t doing more to defend the former president.
“I get it from both sides. As you know, I have consistently spoken up when I’ve disagreed with Donald Trump and I’ve consistently spoken up when I’ve agreed with him on policy, as an example, what I’ve talked about in terms of the tax reform, the regulatory relief, the energy policy,” he said.
“There have been times when I’ve been very supportive on a policy basis, but the substance is one thing and tone and style is another,” he added. “I think we need to tone it down. And I’ve consistently said that.”
Other Senate Republicans have raised concerns about the direction of the party under Trump and called for it to rebuild its identity based on the principles that defined it during the Reagan-Bush era.
“Where is the Republican Party? Who really exemplifies the heart of the party right now? … I think in many ways we are a party that is really struggling to identify,” Sen. Lisa Murkowski (R-Alaska) told reporters Friday.
“We have some that have solidly identified with Trump and probably will continue to identify for years going forward but you have a lot of other people that were not really sold on Trump but they absolutely embraced the policies,” she said.
Murkowski said she wants the GOP to return to the “big-tent” approach to politics of the Reagan years.
Sadosky noted that Portman still embraces the concepts of lower taxes, more efficient government, less regulation and free trade that have been hallmarks of the GOP.
He said Portman’s retirement is a sign “there are too many within the party who judge everything through the prism of, ‘How does this impact Trump?’ and not ‘How does this impact the American economy and American families?’ ”
Portman’s move comes after Republican Sen. Pat Toomey (Pa.), another laser-focused policy expert who likes to work behind the scenes, announced in October that he would retire from politics at the end of 2022.
Toomey, like Portman, is known for his policy acumen and pragmatism and is a close ally and adviser to McConnell.
Sen. Richard Burr (R-N.C.), another longtime McConnell ally, announced in 2016 that this would be his last term and he is also expected to leave Congress at the end of next year.
The three retirements in Ohio, Pennsylvania and North Carolina give Senate Democrats a chance to add to their razor-thin majority in the midterm election.
Now that he’s not running for reelection, more eyes will fall on Portman as a potential GOP vote for compromise legislation on coronavirus relief and other measures.
Portman was one of more than a dozen senators who participated in a phone call Sunday with White House National Economic Council Director Brian Deese to discuss Biden’s proposed $1.9 trillion COVID-19 relief package.
“I still have two more years in my term and I intend to use that time to get a lot done,” Portman, who will become the top-ranking Republican on the Senate Homeland Security and Governmental Affairs Committee, said in a statement.
Opinion