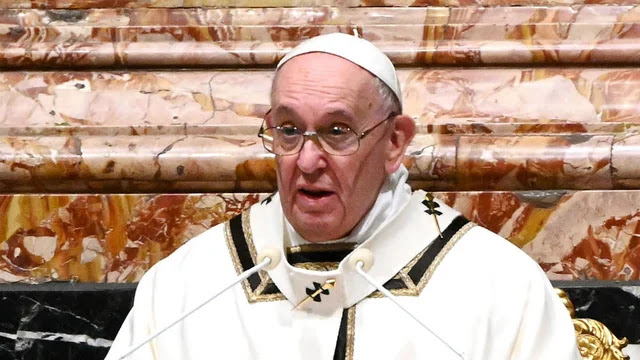 Pope Francis on Wednesday issued a message for the newly-sworn in U.S. President Biden, saying he would pray for God to aid Biden's efforts to heal America's divisions in an Inauguration Day message.
In the statement, the Pope added that he hoped the president would work towards building a society that serves equal justice to all and respects the rights of the vulnerable, according to Reuters.
“Under your leadership, may the American people continue to draw strength from the lofty political, ethical and religious values that have inspired the nation since its founding,” Francis said.
“I likewise ask God, the source of all wisdom and truth, to guide your efforts to foster understanding, reconciliation and peace within the United States and among the nations of the world in order to advance the universal common good,” he continued, according to Reuters.
Biden took office Wednesday as the 46th president of the United States on the steps of the U.S. Capitol surrounded by thousands of National Guardsmen and other security forces following a deadly riot at the Capitol earlier this month which resulted in five deaths.
He is only the second Catholic to hold the nation's highest office, the first being former President Kennedy. The president has regularly attended Mass in recent months and notably did so on the day of his election in November.
Today's remarks were not the first time Francis has commented on the political divisions in American society; after the deadly Jan. 6 riot at the U.S. Capitol, the Pope appeared to refer to President Trump's supporters who stormed the Capitol when he referred to "people who take a path against the community, against democracy and against the common good," who he said, "must be condemned, this movement, regardless of the people."
World