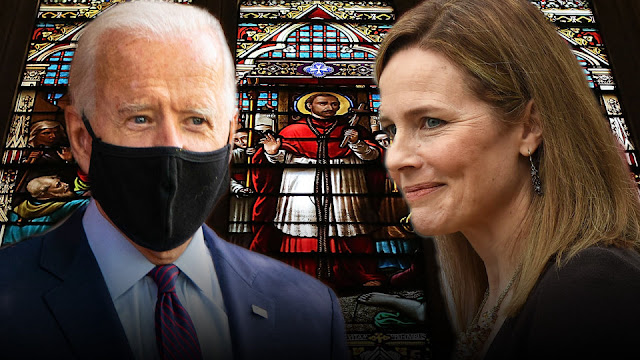 When President Trump nominated Amy Coney Barrett to the Supreme Court, we witnessed a media meltdown. Though Democratic senators largely managed to avoid their past mistakes and didn’t suggest that Barrett’s Catholic faith made her unfit for the bench, progressive critics and liberals in the media made it no secret that her religious beliefs troubled them.
Nearly every major outlet published a story scrutinizing the lay Christian group People of Praise, of which Barrett was once a member, falsely claiming that it was the basis for the misogynistic nation in The Handmaid’s Tale and asserting that Barrett’s membership meant she must sympathize with Christianity’s supposedly anti-woman tenets. One prominent feminist commentator suggested that Barrett’s religious views were disqualifying because Catholicism is inherently sexist. Another insisted that Barrett’s “personal faith” was fine but asserted that the judge should not be confirmed because she would attempt to impose her faith through her rulings.
In past hearings, too, nominees’ Catholic views have faced intense scrutiny from Democratic politicians and outside commentators, who have insinuated that Catholics can’t be competent public servants if they agree with the Church’s moral teaching on abortion and marriage.
And therein lies the issue, exposed all the more clearly by Joe Biden’s first week in the Oval Office. In her first press briefing, White House press secretary Jen Psaki hand-waved away questions about Biden’s abortion policy by reminding the press that the president is a “devout Catholic.” Ahead of his inauguration, Biden received fawning media coverage for attending morning mass at St. Matthew’s Cathedral in D.C.
On Saturday, the New York Times published a lengthy piece by a religion reporter entitled “In Biden’s Catholic Faith, an Ascendant Liberal Christianity,” calling Biden “perhaps the most religiously observant commander in chief in half a century.” In the piece, we are told that Biden’s “Catholic faith grounds his life and his policies” and exemplifies “a different, more liberal Christianity,” one “less focused on sexual politics and more on combating poverty, climate change and racial inequality.”
In other words, Catholic public figures who champion nearly unlimited legal abortion, Christians who use their faith to promote the progressive cause du jour, are perfectly acceptable. Not only that, but they will be lauded as exemplars of their creed, praised for allowing their deep, personal understanding of Christianity to guide and inform their progressive policy stances.
Christians who embrace sexual morality on the other hand, those who believe in the dignity and value of every human life, including the lives of the unborn, will be dismissed as backwards bigots who want to control women’s bodies and impose their outdated religious views on the rest of the country.
Opinion