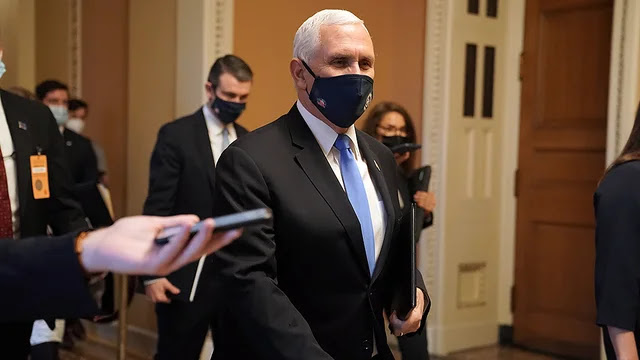 Vice President Pence opposed calls to invoke the 25th Amendment to remove President Trump from office following Wednesday’s a mob of Trump supporters' attacks on the Capitol, according to multiple reports.
Business Insider first reported that Pence would not back the move, citing advisers to the vice president.
Following the violent riots at the Capitol building Wednesday, a number of Republican and Democratic lawmakers urged Pence to invoke the 25th Amendment. The 1967 amendment to the Constitution ensures that the government remains in operation should a sitting president be deemed unfit to perform presidential duties.
A majority of the Trump Cabinet and Pence would have to agree the president is unfit to serve for him to be removed.
Calls for the 25th Amendment to be invoked came amid fears that Trump would incite more violence following the riots that damaged parts of the Capitol and left four people dead.
Trump has repeatedly claimed that the 2020 election was “stolen,” from him and encouraged his supporters at a rally earlier on Wednesday to march to the Capitol and protest Congress's certification of President-elect Joe Biden's Electoral College win.
"Not happening," said a Republican close to Pence when asked about the increased calls for him to replace Trump, according to Insider.
The New York Times later confirmed the news, reporting that a person close to the vice president said Pence is opposed to invoking the 25th with less than two weeks until Biden’s inauguration.
A senior Republican told the Times that Pence’s decision not to make the move is supported by several members of Trump’s Cabinet, who reportedly believe an effort to remove Trump will cause further instability in Washington, D.C.
According to Insider, Pence’s team also considered the effect removing Trump from office could have for the vice president’s own political aspirations of running for the White House in 2024.
House Speaker Nancy Pelosi (D-Calif.) on Thursday said that if Pence does not invoke the 25th Amendment, she would act immediately to impeach him for a second time.
Senate Democratic Leader Charles Schumer (N.Y) has also called on Pence to remove Trump, and progressive House Democrats — led by Reps. David Cicilline (R.I.), Ted Lieu (Calif.), Ilhan Omar (Minn.) and Ayanna Pressley (Mass.) — have been circulating a draft of two articles of impeachment against the president.
The first charges that Trump abused his power by seeking to overturn the results of the 2020 presidential election. Specifically, the charge points to a recent phone call recording published by The Washington Post in which Trump pressured Georgia’s top election official, secretary of State Brad Raffensperger (R) to "find" more than 11,000 votes.
The second article alleges that the president abused his power by inciting violence at the Capitol and trying to “orchestrate an attempted coup against our country” on Wednesday as House and Senate lawmakers certified the election for Biden.
Three GOP governors — Phil Scott of Vermont, Maryland’s Larry Hogan and Charlie Baker of Massachusetts — have also said that Trump should either resign or be removed from office.
National