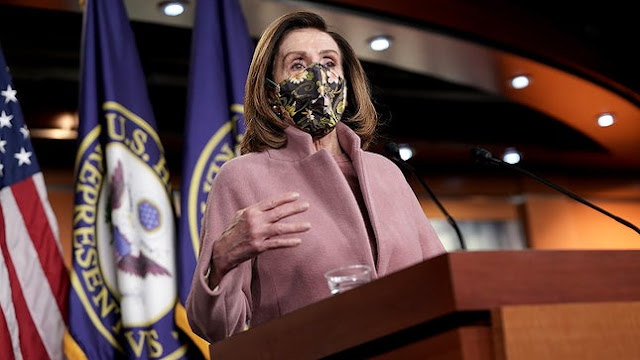 Speaker Nancy Pelosi (D-Calif.) said Thursday that House Democrats will move immediately on a massive coronavirus relief package, setting the stage for an early showdown in the newly flipped Senate over the chief legislative priority of the nascent Biden administration.
House Democrats have rearranged their schedule over the next two weeks, scrapping votes next week to allow the relevant committees to consider the various provisions of their emerging COVID-19 relief package. Pelosi suggested that package could hit the House floor as early as the week of Feb. 1.
"We're getting ready for a COVID relief package. We'll be working on that as we go," she told reporters in the Capitol. "We'll be doing our ... committee work all next week so that we are completely ready to go to the floor when we come back."
A Pelosi aide emphasized that no floor vote has been scheduled.
Biden last week had unveiled a $1.9 trillion emergency relief package, which features many of the wish-list items contained in earlier proposals from Pelosi and House Democrats.
That list includes hundreds of billions of dollars to develop and distribute COVID-19 vaccines, hike unemployment benefits, provide $1,400 in direct payments to qualified Americans and help state and local governments cope financially with the ongoing crisis, which has killed more than 400,000 people in the United States alone.
In his inaugural address Wednesday, Biden called on lawmakers of both parties to come together behind another round of emergency aid, warning of a dark winter without it.
"We’re entering what may be the toughest and deadliest period of the virus," he said. "We must set aside politics and finally face this pandemic as one nation."
House Democrats, who had approved a $3.4 trillion package last year that was ignored by Senate Republicans, are quickly jumping on board, forecasting easy passage in the lower chamber whenever it does hit the floor.
"His focus is absolutely right on. You have to address this pandemic and the health and security of people," Rep. Katherine Clark (D-Mass.), the fourth-ranking House Democrat, said of Biden's speech.
But another enormous coronavirus bill faces a tough road in the Senate, where Republicans are already signaling their opposition to Biden's proposal.
"I suspect the whole package is a non-starter," Sen. Roy Blunt (R-Mo.) said Thursday. He quickly added that there are elements of the proposal that Republicans can support, encouraging Democrats to come to the table on a smaller compromise.
"There’s some things in there that aren’t going to happen, there’s some things that can happen," he said. "And that’s how this process should work."
Pelosi and the Democrats have dismissed the GOP's budget concerns, noting that Republicans cared little about deficits when they adopted their multitrillion-dollar tax cut law. Pelosi has welcomed Biden's proposal as the right medicine for combating the once-in-a-century pandemic.
"The COVID proposals from the administration build on many of the initiatives that were in our packages all along," she said. "It's what the people need, what the country needs to crush the virus."
National