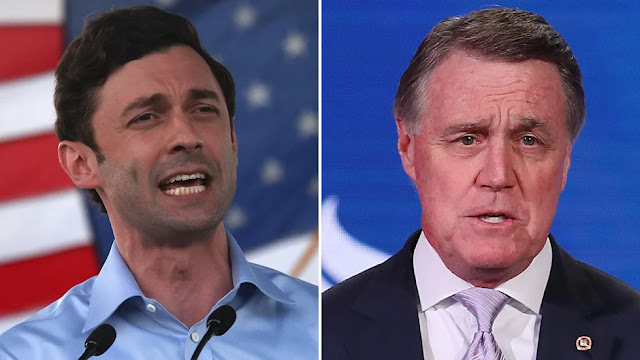 Jon Ossoff notched a critical victory in Georgia on Wednesday, with a projected defeat of Republican David Perdue in a Senate runoff election that will give Democrats control of the upper chamber.
The Associated Press called the race for Ossoff shortly after 4 p.m. EST. Ossoff currently leads Perdue by less than 0.6 percentage points, a slim margin but just over the 0.5-percentage-point threshold that would trigger an automatic recount of the vote.
The runoff was one of two in the Peach State that determines which party will control the Senate – and how effectively President-elect Joe Biden will be able to advance his legislative agenda – beginning Jan. 20.
Early Wednesday morning, Democrat Raphael Warnock was declared the winner in a separate Senate runoff election in Georgia, unseating Republican Kelly Loeffler.
The dual Democratic victories in Georgia ensure that the party will control the Senate in 2021 and beyond.
Heading into Tuesday, Republicans held a 50-to-48 seat advantage in the Senate. If Democrats pick up both Georgia Senate seats, they will effectively gain a majority in the upper chamber, with Vice President-elect Kamala Harris casting the tie-breaking vote.
Ossoff, the 33-year-old chief executive of a London-based documentary film company, first rose to national political prominence during his 2017 campaign for a suburban-Atlanta House seat in a special election.
He ultimately lost that race to Rep. Karen Handel (R-Ga.). But the election, which became the most expensive House race in U.S. history, helped springboard Ossoff into his Senate bid against Perdue, a former corporate executive who is among the wealthiest members of the upper chamber.
The race between Ossoff and Perdue, whose first term in the Senate expired Sunday, advanced to a runoff after neither candidate surpassed the 50 percent threshold needed to win outright in November. Perdue finished slightly ahead in that election, notching just shy of 50 percent to Ossoff’s 47.9 percent.
But the runoff campaign between the two men became consumed over the past two months by congressional negotiations over a coronavirus pandemic relief package and President Trump’s repeated attempts to overturn the results of the 2020 presidential election.
Perdue hitched his political fortunes close to those of Trump, while simultaneously seeking to cast Ossoff as a socialist with pro-China leanings. Ossoff, meanwhile, seized on Perdue’s unwillingness to break with the president, as well as allegations that the Georgia senator made a series of well-timed stock trades amid the onset of the coronavirus pandemic.
Despite their repeated attacks on one another, Ossoff and Perdue never met face-to-face on the debate stage during their runoff campaigns. Perdue declined to participate in any debates, largely sticking to a strategy of treating Ossoff as if he was a non-threat.
Ossoff, however, proved an effective fundraiser. He pulled in some $100 million for his runoff campaign, dwarfing what would be an otherwise massive haul of $68 million for Perdue.
Ossoff’s victory on Wednesday was driven by a wave of Democratic turnout, particularly in Atlanta and its suburbs. Republicans, meanwhile, had bet that strong Election Day turnout in rural areas on Jan. 5 would put them over the finish line.
While turnout on both sides set records for a runoff election in Georgia, Republicans fell short of their goals in the rural parts of the state where they remain dominant. Democrats, however, benefited from strong turnout among Black voters and young voters, who helped hand them their two victories.
Perdue’s loss adds to Republicans’ troubles in a state that has been a Republican stronghold for years, coming on the heels of Biden’s victory over Trump there in November. Ossoff’s win, meanwhile, is the latest sign of Georgia’s transformation into a political battleground that neither party can comfortably claim as their own.
The two Democratic victories on Wednesday, however, were overshadowed by chaos in Washington, where a mob of Trump supporters stormed the U.S. Capitol as lawmakers met to certify Biden’s Electoral College victory. The mayhem forced lawmakers, congressional staffers, reporters and others to evacuate or take shelter.
The Washington and Virginia National Guards have been activated to help quell the riots.
National