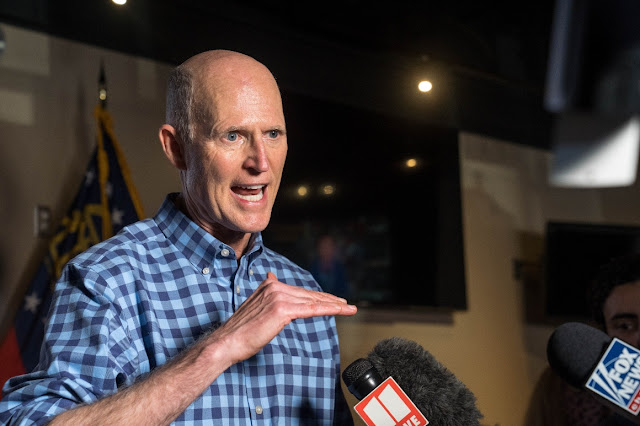 National Republican Senatorial Committee (NRSC) Chairman Rick Scott (R-Fla.) said Thursday that he will back incumbent GOP senators against Trump-backed primary challengers, including members of the former president’s family.
“I’m supporting incumbents,” Scott told reporters on Capitol Hill, asked about chatter of Ivanka Trump mounting a primary challenge against Sen. Marco Rubio (R-Fla.).
Pressed if that that was his stance regardless of former President Trump, who has vowed to support 2022 primary challenges to some incumbents, and if he would specifically support Sen. John Thune (R-S.D.) against a Trump-backed challenger, Scott reiterated that he was supporting Senate GOP incumbents.
The NRSC typically supports Republican incumbents but Scott’s comments come as Trump has threatened to drive a wedge into GOP politics during the 2022 cycle, when Republicans are defending 20 seats.
Trump has specifically threatened to support a primary challenge against Thune, after the No. 2 GOP senator warned that efforts to overturn the Electoral College vote in Congress would fail.
Trump vowed as he departed Washington that he would “be back in some form.”
Asked if he thought Trump-backed primary challengers could make his job as campaign committee chairman harder, Scott predicted that the 2022 cycle would be focused on the GOP vs. President Biden.
“Part of what I'm trying to do is get everybody to focus on, you know, what the difference is between Republicans and Democrats. I think it's gonna be clear with a lot of Biden stuff,” Scott said.
Scott is one of eight GOP senators who supported at least one challenge to the Electoral College vote during Congress's tallying of the results on Jan. 6 and 7.
Scott voted for the challenge to Pennsylvania's Electoral College results, an objection that was formally made after rioters stormed the Capitol.
The support from dozens of congressional Republicans for throwing out the results in key battleground states has sparked backlash from the party's donors and led to several corporations cutting off financial support.
Scott, who noted that he's spoken to hundreds of donors since becoming NRSC chairman, said he didn't regret his vote.
"I mean, you have to remember what I went through in my 2018 election where they completely violated the law. They found 95,000 votes after election night. Chuck Schumer sent lawyers down because he didn't care what the votes were, he's going to the court. So, I want people to follow the law," Scott said.
Former Sen. Bill Nelson (D-Fla.) filed lawsuits shortly after the 2018 election, including challenging the state's election laws. Nelson ultimately conceded the race on Nov. 18 after a statewide manual recount.
When a reporter noted that, unlike in his election, the GOP challenges, and specifically the one Scott supported, to the Electoral College vote took place after a deadly riot, Scott demurred.
"I want people to follow the law," he said.
National