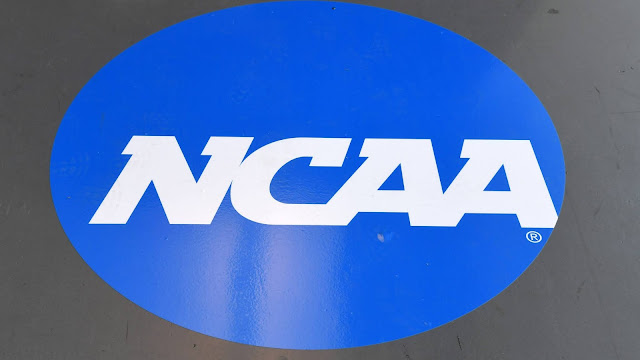 The NCAA on Monday postponed a vote on college athletes' ability to profit financially off the use of their names, images and likenesses (NIL) after receiving a warning from the Department of Justice over potential antitrust violations last week, USA TODAY reports.
In the original DOJ letter sent Friday, Assistant Attorney General Makan Delrahim expressed concern over the NCAA’s proposed NIL rules, which would allow athletes to profit off social media, personal appearances, the use of trademarks and logos and more. The proposals were set to be voted on this week during the 2021 NCAA Convention.
The antitrust division has been "monitoring closely" the NCAA Division I Council's ongoing efforts to review and revise these rules, the letter states.
"The Division is also aware of recent reports that the NCAA may seek legislation that would grant the NCAA immunity from the antitrust laws," it reads. "We urge you to ensure that whatever rules the NCAA ultimately adopts will allow college athletes to benefit from robust competition for their talents."
Delrahim said in an interview with USA TODAY that the antitrust division applauds the NCAA’s "efforts to increase integrity in the process," but they "must be very careful to ensure that a board does not operate as a backdoor way to limit competition."
"We want to ensure that the NCAA imposes only the narrowest form of competitive restriction that is necessary," he added.
Delrahim said he felt compelled to write the letter to the NCAA because "we want them to benefit from the Antitrust Division’s views as part of our ongoing dialogue, so as to avoid any misunderstanding on what the law requires."
The letter also condemned the NCAA's student athlete transfer rules, which had also been set for a vote on changes before Monday's postponement.
Delrahim argued that current NCAA rules leave college athletes at risk of losing scholarships and alienating their coaches just by exploring transfer options, as they are currently required to notify their school of their desire to transfer before contacting, or being contacted by, other schools. He also pointed out that students who transfer generally are required to wait a year before they can play again at the collegiate level.
"The NCAA and its Transfer Working Group should consider seriously whether these rules, taken together, unreasonably deter students from entering the transfer process and, as a result, leave college athletes without a competitive alternative to their current school," he wrote.
"Our expectation is that our engagement with the NCAA over its transfer rules will … result in the NCAA’s removal of unnecessary anticompetitive barriers that stand in the way of college athletes transferring between schools."
"Of course, the Division stands ready to enforce the antitrust laws if necessary," he added.
On Saturday morning, NCAA President Mark Emmert reportedly responded to the letter, saying he would take Delrahim’s advice and "strongly recommended" to the council and the Division I board of directors that they delay the vote on the proposed rule changes, despite being confident that they are "fully compliant" with antitrust law.
Delrahim sent a follow-up Saturday night, in which he took issue with the fact that the NCAA was not planning to address its current transfer rules during this week's convention.
"The Division welcomes further discussion of these matters with the NCAA, however, it is troubling that the NCAA continues its process delays to avoid addressing antitrust concerns to the detriment of college athletes, many of whom come from African-American and other diverse communities or come from economically disadvantaged backgrounds," he told USA TODAY.
The Division II Presidents Council is expected to delay its vote as well, according to a release from the NCAA.
The decision comes a month after Democratic Sens. Cory Booker (N.J.) and Richard Blumenthal (Conn.) joined the fight for increased student athlete compensation rights by championing the College Athlete Bill of Rights. The proposed bill would result in coverage for all student-athlete medical expenses and a revenue-sharing arrangement for players.
National