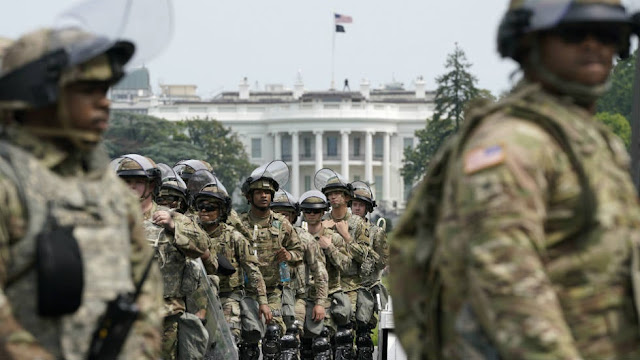 National guardsmen stationed in Washington, D.C., are beginning to return to their home states following a deployment to guard the inauguration that was marred by lackluster conditions and a coronavirus outbreak.
Governors from several states announced Friday that they are ordering their guardsmen home or that they are already leaving Washington. About 25,000 troops were sent to guard President Biden’s inauguration on Wednesday after the Jan. 6 riot at the Capitol shook officials’ confidence in their security measures for the quadrennial event.
However, the Capitol appeared ill-prepared to deal with the influx of troops. Upon the guardsmen’s arrival, they were seen sleeping on the floor of the complex. Lawmakers later advocated for them to have cots to sleep on, though the guardsmen were then pushed out of the building Thursday for unknown reasons, sparking backlash from lawmakers and governors before the troops were allowed back in the building.
“We are bringing home our National Guard members from D.C. They served with distinction. Some guardsmen from other states were treated in a fashion inconsistent with how our service members should be treated,” Alaska Gov. Mike Dunleavy (R) tweeted.
“These women and men put their lives on the line for our freedom — that they would be put out to a parking garage in return is appalling. I’ve confirmed that none of our 29 @AZNationalGuard members were among those displaced. They are headed back to AZ. Thank you for your service!” added Arizona Gov. Doug Ducey (R).
“It’s time to welcome our TN National Guard soldiers & airmen home today after their mission in DC. Very disappointed in the way this mission came to a close & the overall treatment of the National Guard in DC,” said Tennessee Gov. Bill Lee (R).
Troops from several other states, including Arkansas, Georgia, Florida, Mississippi and South Carolina, are also on their way home.
Besides the poor conditions the guardsmen were met with, an outbreak of the coronavirus rippled through the ranks in Washington. It was not immediately clear how many guardsmen were infected with the virus, but reports indicated that somewhere between 100 and 200 troops could have been diagnosed with COVID-19.
The National Guard did not immediately confirm how many troops contracted the virus, but maintained health guidelines were followed.
“When National Guard members departed from their individual states and upon arrival to the DC Armory, they had their temperatures checked and completed a screening questionnaire. Masks and social distancing are required where the mission allows,” a spokesperson told The Hill. “They are following these procedures daily.”
National