National Guard to ramp up DC presence to at least 10,000 ahead of Biden inauguration 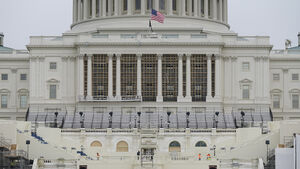 The National Guard will have at least 10,000 troops in Washington, D.C., by Saturday to boost security ahead of President-elect Joe Biden’s inauguration next week, with as many as 15,000 authorized if needed, the head of the National Guard Bureau (NGB) said Monday.
Chief Gen. Daniel Hokanson said the Defense Department has authorized the NGB to “provide up to 15,000 Guard members to meet current & future inauguration support requirements.”
The authorization of extra troops follows requests from the Secret Service, Capitol Police and Park Police “to support security, logistics, liaison, & communication missions,” Hokanson said in a statement.
“As always, our first priority is to protect people and property. The National Guard looks forward to working with our district and federal partners to ensure a peaceful inauguration for President Elect Biden on January 20th,” he added.
There are roughly 6,200 guardsmen from six states and the District currently in Washington following the violent riots that broke out at the Capitol on Wednesday after President Trump urged his supporters at a rally to march on the building.
The Pentagon has received criticism for its seeming lack of readiness and quick response to the violence.
Five people were killed in the chaos, including a Capitol Police officer, as a mob of Trump’s supporters overran a police perimeter and smashed through doors and windows to enter the building, assaulting those inside, deploying chemical irritants and ransacking offices. Only a small force of 340 guardsmen was on hand elsewhere in D.C. during the mayhem.
Pentagon officials have pushed back on allegations that they were caught flat-footed, telling reporters last week that the chaotic events were a “rapidly evolving situation” they did not anticipate.
Top Defense Department spokesman Jonathan Hoffman told reporters that "as recently as Monday or Tuesday, we were informed that additional support from [the Department of Defense] was not needed."
“We rely on Capitol Police and federal law enforcement to provide an assessment of the situation,” Hoffman said. “And based on that assessment that they had, they believed they had sufficient personnel and did not make a request.”
Law enforcement officials have now opened at least 25 domestic terrorism cases following the riot, and two House Democrat lawmakers have since sent a letter to Army Secretary Ryan McCarthy requesting a briefing for members of the House Armed Services Committee on the Pentagon’s and National Guard’s responses to the riot.
Washington, D.C., Mayor Muriel Bowser (D) on Sunday called on the Department of Homeland Security to take additional steps to ensure that the nation’s capital is secure ahead of the inauguration.
National