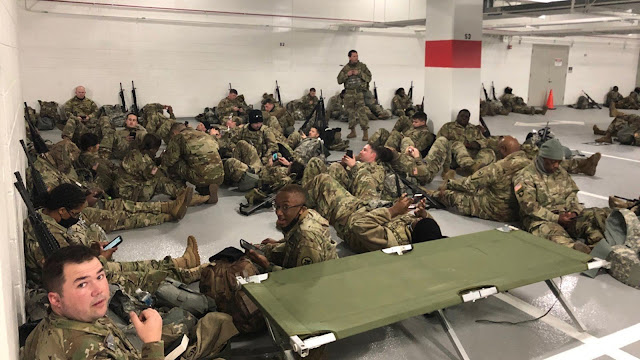 National Guardsmen were allowed back inside the U.S. Capitol on Thursday night after having been moved to a parking garage, according to multiple reports.
Guardsmen had moved to a nearby parking garage after they were ordered to vacate the Capitol and other congressional buildings, Politico reported. They were asked to set up mobile command centers outside of the Capitol or at hotels.
Guardsmen were also told to take their breaks in parking garages, the outlet reported.
The report, which included a number of photos of Guardsmen sitting and sleeping in a garage, sparked outrage among lawmakers who offered to lend their offices to troops needing to take rest breaks.
Sen. Tammy Duckworth (D-Ill.) said that Capitol Police apologized to Guard personnel by 10:30 p.m., NBC News reported.
“Unreal. I can’t believe that the same brave servicemembers we’ve been asking to protect our Capitol and our Constitution these last two weeks would be unceremoniously ordered to vacate the building. I am demanding answers ASAP. They can use my office.”
Sen. Kyrsten Sinema (D-Ariz.) also expressed outrage and offered her office.
"My office is available; the Guard is welcome to it. There is plenty of space in the US Capitol for the men and women keeping us safe," she tweeted.
About 25,000 National Guard troops flooded the Capitol due to heightened security concerns around President Biden’s inauguration. The concerns stemmed after a mob of former President Donald Trump’s supporters breached the U.S. Capitol as Congress was meeting to certify the Electoral College Vote.
The National Guard Bureau said in a statement Thursday that troop relocation was temporary because Congress was in session, CNN reported.
“The National Guard continues to assist and support the U.S. Capitol Police. As Congress is in session and increased foot traffic and business is being conducted, Capitol Police asked the troops to move their rest area. They were temporarily relocated to the Thurgood Marshall Judicial Center garage with heat and restroom facilities. We remain an agile and flexible force to provide for the safety and security of the Capitol and its surrounding areas.”
Earlier this month, photos of National Guardsmen sleeping on the floors of the Capitol emerged as security was ramped up across D.C. ahead of President Biden's inauguration.
National