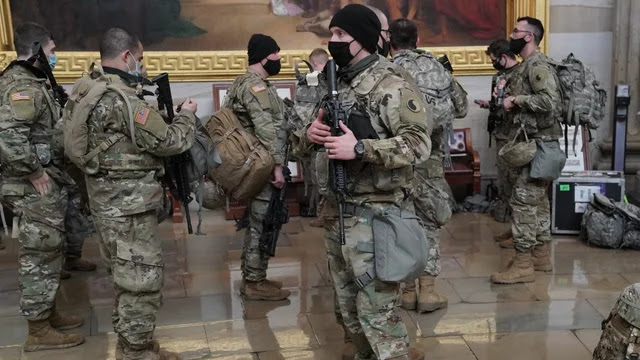 National Guardsmen providing security at the U.S. Capitol ahead of President-elect Joe Biden’s inauguration are now armed, the D.C. National Guard said.
Army Secretary Ryan McCarthy authorized the troops to be armed at the request of federal authorities, the D.C. Guard said in a statement. The troops were armed as of 6 p.m. Tuesday, it added.
“National Guard members are postured to meet the requirements of the supported civil authorities, up to and including protective equipment and being armed if necessary,” the D.C. Guard said. “The public’s safety is our top priority.”
Reporters entering the Capitol on Wednesday — when the House will vote to impeach President Trump for “willfully inciting violence against the Government of the United States” — reported hundreds of service members napping inside the building with firearms at their sides.
National Guard members from around the country started flooding Washington, D.C., after last week’s insurrection at the Capitol during Congress’s joint session to certify Biden’s victory in the presidential election.
Five people died in the riots — including a Capitol Police officer — and lawmakers, staffers, journalists and Vice President Pence were forced to hide in secure locations while mobs sieged the building.
Lawmakers have since been briefed on several other security threats ahead of Biden’s inauguration.
During last week’s mayhem at the Capitol, just 340 unarmed Guardsmen were elsewhere in D.C. providing traffic control. Before the riot, local officials and the Pentagon had sought to minimize Guard involvement in responding to any protests after heavy criticism of the response to June’s racial justice protests.
But after the protests turned into insurrection last week and with credible threats of further violence ahead, thousands of Guardsmen were activated. They also erected a seven-foot “non-scalable” fence around the Capitol and other nearby government buildings.
Up to 15,000 National Guard members have been authorized to provide security for the inauguration, with about 10,000 expected to be in D.C. by Saturday, National Guard Bureau Chief Gen. Daniel Hokanson said Monday.
National