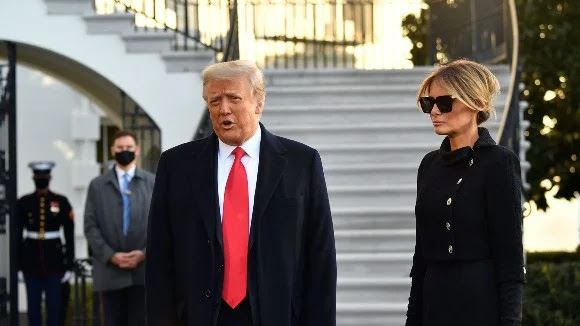 The National Archives and Records Administration officially launched a website for former President Trump’s Presidential Library.
The site was launched on Wednesday shortly after President Biden’s inauguration, and features the archived websites of the Trump White House and other sites such as former first lady Melania Trump’s Be Best Initiative.
Also included are online resources to provide research information on Trump’s presidency, as well as information on the archived social media accounts of the former administration.
The official White House social media accounts were turned over to Biden’s administration shortly after his swearing in Wednesday morning.
The National Archives noted that many former Trump administration officials used personal accounts, including Trump who often used his @realDonaldTrump account before it was permanently suspended in light of the Jan. 6 riot at the U.S. Capitol. The Department  said it’s working to make content from those accounts “publicly available as soon as possible.”
According to the website, Trump's official presidential records will be subject to Freedom of Information Act Requests (FOIA) beginning on Jan. 20, 2026.
The agency said in a statement that its presidential libraries “promote understanding of the Presidency and the American experience. They preserve and provide access to historical materials, support research, and create interactive programs and exhibits that educate and inspire.”
The Trump Library will be the fifteenth Presidential Library operated by the National Archives.
National