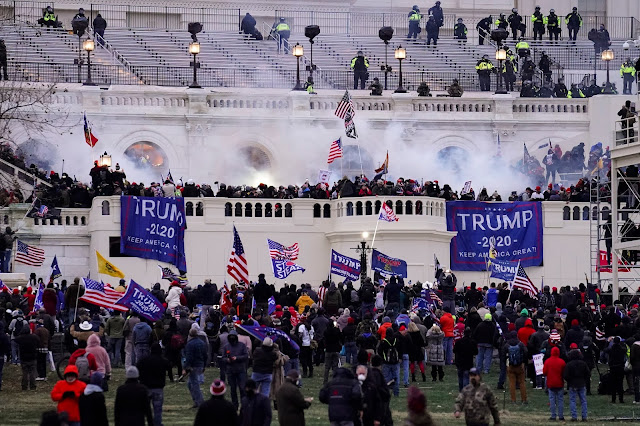 Most of 120 people who have been arrested in connection to or identified as being at the Capitol riot through photos and videos are longtime supporters of President Trump, an Associated Press analysis determined.
The Associated Press reviewed the social media posts, voter registrations, court files and other public records of 120 individuals suspected of being involved with the riots at the Capitol building and concluded that most backed the president.
The AP analysis comes after several conservatives, including lawmakers, have promoted without evidence the theory that groups like antifa and Black Lives Matter infiltrated the pro-Trump protests and were responsible for the riots in the Capitol.
The 120 people included Republican Party officials, GOP political donors, far-right militants, white supremacists and those who believe in QAnon, a theory that Satan-worshipping pedophiles control the government, the AP found.
Many of the rioters were found to have posted unfounded claims promoted by Trump that the election had been stolen or that widespread voter fraud contributed to President-elect Joe Biden’s victory. Several of the posts involved threats of violence against Democrats or Republicans considered not on the president’s side. Many posted either during or after Wednesday’s events, with several expressing pride in their actions, according to the AP.
At least 90 people have been arrested for charges ranging from curfew violations to felonies such as assaulting police officers, possessing illegal weapons and making death threats against Speaker Nancy Pelosi (D-Calif.). Records indicate that some of the rioters are accused of being heavily armed, including Lonnie Leroy Coffman and Cleveland Grover Meredith Jr., both supporters of the president.
Several were identified as QAnon supporters, including Doug Jensen, Tara Coleman and Jake Chansley, who calls himself the “QAnon Shaman.” Others were found to be associated with the Proud Boys, the far-right group that Trump instructed to "stand back and stand by" during the first presidential debate.
The AP analysis contradicts claims that Trump supporters weren't the ones that stormed the Capitol.
Rep. Matt Gaetz (R-Fla.) said hours after the raid that, “If the reports are true, some of the people who breached the Capitol today were not Trump supporters. They were masquerading as Trump supporters and, in fact, were members of the violent terrorist group antifa.”
The FBI has shut that theory down in the days after the attack, saying no evidence has supported that the antifa movement was involved in the storming of the Capitol building.
Trump had called on his supporters to show up in D.C. to protest Congress’ certification of the Electoral College and Biden’s victory. When addressing the demonstration during a speech, he encouraged people present to march toward the Capitol.
A mob that invaded the Capitol building forced both chambers to halt their debate of the Electoral College results and lawmakers to flee to secure locations. Five people died amid the riots, including Capitol Police Officer Brian Sicknick and Ashli Babbitt, a female rioter shot by a different Capitol Police officer.
National