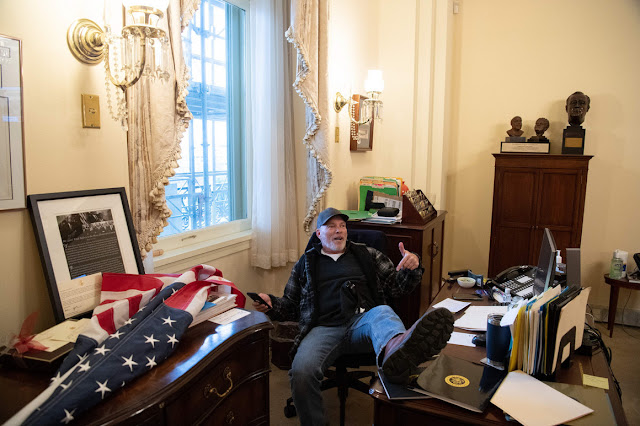 Federal prosecutors on Friday unveiled more charges following the Capitol riot this week, announcing that among those indicted are a sitting West Virginia state legislator and a man accused of entering and stealing items from the Speaker Nancy Pelosi's (D-Calif.) office.
Officials from the U.S. attorney's office and the FBI field office in Washington, D.C., offered more details to reporters about their investigation and the 55 cases that they've brought against members of a mob that stormed the Capitol on Wednesday. The riot left five people dead.
"My Office, along with our law enforcement partners at all levels, have been expeditiously working and leveraging every resource to identify, arrest, and begin prosecuting these individuals who took part in the brazen criminal acts at the U.S. Capitol," Michael Sherwin, the acting U.S. Attorney for D.C., said in a statement.
"We are resolute in our commitment to holding accountable anyone responsible for these disgraceful criminal acts, and to anyone who might be considering engaging in or inciting violence in the coming weeks – know this: you will be prosecuted to the fullest extent of the law.”
Ken Kohl, the No. 2 federal prosecutor for the district, said on a press call that his office had charged Derek Evans, a Republican West Virginia legislator who had reportedly filmed himself storming the Capitol, with entering a restricted area.
An Arkansas man named Richard Barnett was arrested in Little Rock this morning and is accused of unlawfully entering Pelosi's office and stealing public property as well as violent and disorderly conduct. Kohl said that Barnett had left a note in Pelosi's office.
According to media reports, Barnett had boasted publicly about entering Pelosi's office, putting his feet up on her desk and taking her mail.
Prosecutors also revealed the name of a man they said had brought multiple weapons to the protest. Kohl said that police searched a truck belonging to an Alabama man named Lonnie Coffman and found one handgun, an M4 carbine assault rifle and 11 Molotov cocktails that included "Styrofoam material that essentially constitute homemade napalm."
A U.S. Capitol Police officer said in an affidavit filed with the D.C. federal court that investigators do not suspect Coffman of planting the pipe bombs that were found nearby at the Democratic and Republican party headquarters.
Kohl said that the Justice Department is still in the early stages of its investigation and is committed to a thorough review to find out who else could be charged for their role in the riot.
"We literally have hundreds of prosecutors and agents working from three command centers on what is really a 24/7 operation," he said. "It is active, it is fluid, it's evolving."
The Justice Department also released the names of 13 of the 15 defendants who have been charged in federal court. About 40 have been charged in D.C. Superior Court.
Most of the federal defendants face charges of unlawful entry or violent and disorderly conduct on Capitol grounds. An individual named Cleveland Meredith was charged with making interstate threats against Pelosi.
FBI Director Christopher Wray said the bureau would continue to investigate those who were involved in the riot.
“Today’s charges are just the beginning of the FBI’s ongoing efforts to hold those responsible for the criminal acts of violence and destruction that unfolded during the U.S. Capitol building breach on January 6th,” Wray said in a statement. "We will continue to aggressively investigate each and every individual who chose to ignore the law and instead incite violence, destroy property, and injure others."
National