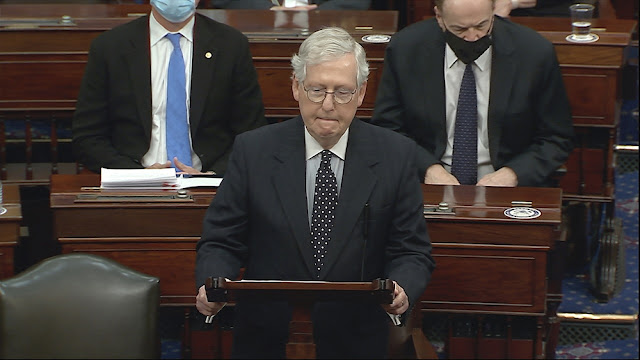 Senate Majority Leader Mitch McConnell’s (R-Ky.) office told Senate Minority Leader Charles Schumer’s (D-N.Y.) staff on Wednesday that the GOP will not agree to reconvene the Senate before Jan. 19 to allow an impeachment trial while President Trump is still in office.
A senior Senate Republican aide confirmed that McConnell’s office reached out to Schumer’s office to relay the message that Republicans will not agree to a Friday session to enable House Democrats to present an article of impeachment to the Senate while Trump is in office.
McConnell said in a memo circulated to colleagues last week that the Senate will not be able to handle business on the floor until senators are scheduled to return to Washington on Jan. 19 unless all 100 senators agree to reconvene sooner.
The memo stated that unless there is unanimous consent from senators, Trump’s impeachment trial would not be allowed to begin until 1 p.m. on Jan. 20, at which time Joe Biden will have been sworn in as president.
“It would require the consent of all 100 senators to conduct any business of any kind during the scheduled pro forma sessions prior to January 19,” the memo states.
“The Senate trial would therefor begin after President Trump’s term has expired — either one hour after its expiration on Jan. 20 or twenty-five hours after its expiration on Jan. 21,” it states.
Schumer on Tuesday disputed that claim and said that he and McConnell could agree to reconvene the Senate in an emergency session in the next few days.
He says that legislation passed in 2004 allows the Senate majority and minority leaders to reconvene the Senate at any time to respond to emergencies.
“There was legislation passed in 2004 that allows the Senate minority and majority leader to jointly reconvene the Senate in times of emergency. This is a time of emergency,” Schumer said.
“I’ve asked him to call the Senate back — all he needs is my agreement, I’m still minority leader,” he said.
National