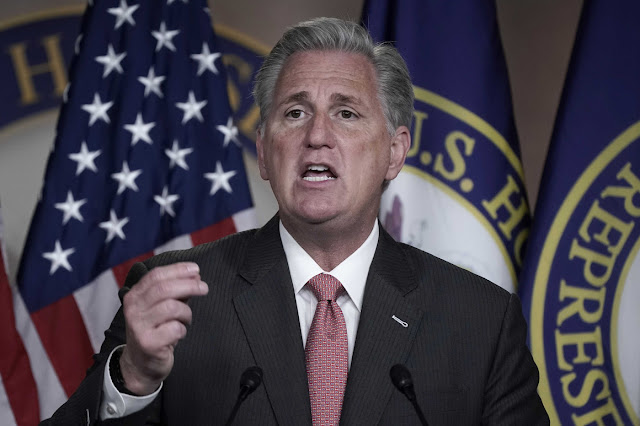 House Minority Leader Kevin McCarthy (R-Calif.) said he wants Rep. Liz Cheney (R-Wyo.) to remain chairwoman of the House Republican Conference as she faces pushback from conservatives for voting to impeach President Trump.
The California Republican told reporters at a press conference on Thursday that while he would like to see Cheney — the No. 3 Republican in the House and the highest-ranking woman in GOP leadership — stay in her position, there are questions he would like answered on her messaging. Cheney, in her statement announcing her decision to impeach, had accused Trump of inciting the riot at the Capitol on Jan. 6.
“We will have a conference next week. We won't air it to the public. But we'll answer the questions everybody has. This is the same leadership team with the ranking members and others that came five seats away from winning a majority when everybody in America thought we were going to lose 20 seats,” he said.
“Yes, we allow differences of opinion inside our conference. They're welcomed. But I think there's questions that need to be answered, style in which things were delivered. At the end of the day, we will unify because our policies are right, which will unify us. ... Do we have growing pains? Yes, we will. But we will do it in our private manner of a conference that we hold every time and we'll have it next week."
His comments come as a group of House conservatives has aggressively pursued avenues to oust the Wyoming Republican, arguing that her remarks did not reflect those of the conference as a whole and the timing on her announcement provided Democrats with talking points to attack GOP lawmakers.
House Freedom Caucus Chairman Andy Biggs (R-Ariz.) and first-term Rep. Matt Rosendale (R-Mont.) are leading the efforts on a petition to force a special conference meeting where they are looking to force a vote on a resolution calling for her to step down.
McCarthy previously released a statement through a spokesman last week stating he would not back her ouster.
Cheney has asserted she has no plans to vacate her position, telling reporters last week that it was a “vote of conscience” and that “she’s not going anywhere.”
A number of GOP lawmakers have come to Cheney’s defense, arguing the infighting will give Democrats an edge as they fight to take back the majority in 2022.
“I think it'd be a disaster. I think we need to keep our eye on the ball. I think we have a very great chance of taking the majority, and if we continue to give the American people a vision of Republican internal fratricide, that doesn't do us any favors in convincing them that we're better off to lead the House of Representatives come midterm presidency of Joe Biden,” Rep. Rodney Davis (R-Ill.) told reporters on Tuesday.
“And I'll be the first one to stand up and say, in front of all of my colleagues, that this is not a path we ought to take. We need to be showing the American people where we come together, what our vision is, what we would do differently than Democrats.”
National