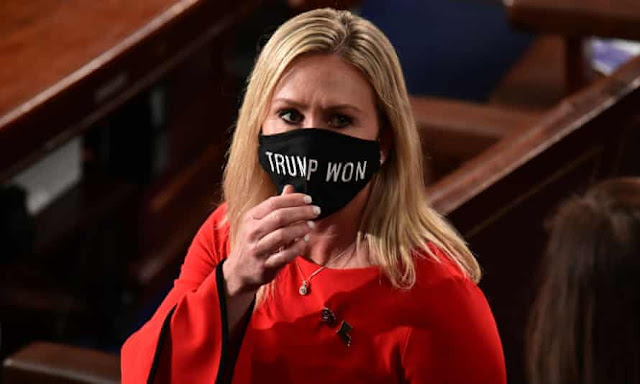 Rep. Marjorie Taylor Greene (R-Ga.) said Saturday that she spoke with former President Trump as she faces growing bipartisan criticism over past social media posts in which she expressed support for violence against Democrats.
“I had a GREAT call with my all time favorite POTUS, President Trump! I’m so grateful for his support and more importantly the people of this country are absolutely 100% loyal to him because he is 100% loyal to the people and America First,” Greene tweeted.
A spokesperson for Trump did not offer a comment about the conversation with Greene.
The call comes as a growing chorus of lawmakers on both sides of the aisle rebukes Greene after internet sleuths and journalists uncovered a trove of social media remarks showing the Georgia Republican indicating support for comments that advocated for the deaths of top Democrats.
Among the social media posts that have come under scrutiny are a 2018 message in which Greene said that the “stage is being set” in response to a post calling for the assassinations of former Secretary of State Hillary Clinton and former President Obama.
Greene in January 2019 also allegedly liked a Facebook comment that stated “a bullet to the head would be quicker” to remove Speaker Nancy Pelosi (D-Calif.) from office.
Prior to the newly resurfaced comments, Greene had already drawn scrutiny for past offensive remarks about Muslims and Jews and for supporting the QAnon conspiracy theory, which posits that Democrats are part of a Satanic sex trafficking ring.
However, pressure on House Republicans to find some kind of punishment for the most recently uncovered comments reached a boiling point this week.
Democrats and outside groups have called on GOP leadership to take any one of an array of options, from stripping her of her committee assignments to backing a resolution to expel her from Congress.
Expelling a member from the House requires a two-thirds majority vote, an unlikely scenario given Democrats’ narrow majority. However, even some in the GOP have expressed alarm at her remarks.
“These comments are deeply disturbing and Leader McCarthy plans to have a conversation with the Congresswoman about them,” a spokesperson for House Minority Leader Kevin McCarthy (R-Calif.) said this week.
Sen. Mitt Romney (R-Utah), one of the few Republicans willing to consistently criticize Trump, rebuked both him and Greene after news of their conversation broke.
“Lies of a feather flock together: Marjorie Taylor Greene’s nonsense and the 'big lie' of a stolen election,” he tweeted Saturday.
Greene has railed against her detractors in recent days, accusing Democrats and the “Fake News” media of trying to “take me out.”
“I won’t back down. I’ll never apologize. And I’ll always keep fighting for the people. For me, it’s America First!!!” she tweeted Saturday.
Greene also alluded to comments Pelosi made this week when she slammed the GOP lawmaker and described what she viewed as a threat posed by Greene. Pelosi said "the enemy is within" the House.
“Yes there is an enemy within,” Greene wrote Saturday. “And that enemy is a poisonous rot of socialist policies and America last sell outs who are pompous hypocrites that believe they are untouchable elites.”
National