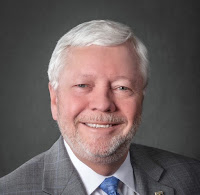 A pioneer for Lubbock businesses, Eddie McBride, is now in his last year on the job.
"It's time to move on and let somebody else have this job and have as much fun in it as I've had over the last 20 something years," McBride said.
The Lubbock Chamber of Commerce has announced its president and CEO will retire after this year.
In McBride's two decades on the job, he says he's enjoyed working with people on a daily basis the most.
"Working with the businesses in our community and working with many of the issues and some of the community development stuff that we've had a chance, has been really heartfelt. It's been really important for me to have a role to play in that. So, I've been very proud of both what the Chamber has done and also what the community has turned out," McBride said.
McBride says most of the businesses in Lubbock are small businesses and they've taken the biggest piece of his heart.
"To hear the passion, and they put their heart into their business and so it really tickles you when you have an opportunity to work with them and help them succeed," McBride added.
Since 1999, Lubbock has received a 5-star accreditation from the US Chamber of Commerce three times, and McBride's received the highest honor from the Texas Chamber of Commerce Executives.
He says he's most proud of the "Lubbock, the Giant Side of Texas" image campaign, the Imagine Lubbock Together visioning plan and his role in the alcohol petition.
"Pretty, pretty proud of the fact that we've put a lot of pins in the map of Lubbock, Texas, and West Texas, to represent, and Texas Tech University. I think all in all it's been a very, very fruitful and very positive experience for me being able to do that," McBride said.
McBride says the decision is a culmination of wanting to spend more time with his family and many of his friends also retiring.
He says he will spend the next year making sure the Chamber continues its day-to-day duties, while preparing the right transition for the right person.
"I think, all in all, this transition is going to be good for the Chamber. It's going to be good for our community, because we get somebody that's got some fresh ideas and somebody that can take the chamber to the next level, I think is what the whole intent is going to be," McBride added.
His last day will be January 31, 2022.
Local