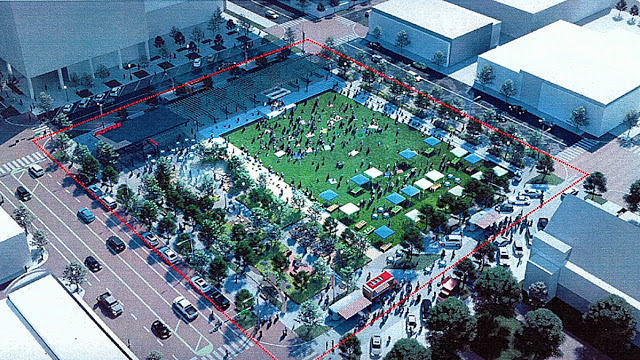 The city is planting the seeds for downtown's revitalization, approving TBG, a landscape, architecture and planning firm, as the design consultant for a new "green space" downtown.
Robert Taylor, chair of the downtown TIF board, says the park would bring new opportunities for businesses, workers and citizens from all over Lubbock.
"It creates a spot for food trucks. It creates the atmosphere for walking the dog. It'll probably even have a little area for a coffee shop," Taylor said.
Taylor says there's an increased demand of people wanting to live downtown, so the civic park is a necessary addition.
"In urban living, you have your space that you live in with very, very seldom does that include any outdoor space. And so as these projects are being developed downtown that will be the outdoor space for the citizens," Taylor added.
The proposal is for the park to go at Broadway and Avenue L, replacing the old LP&L building.
Taylor says the challenge will be what fits in the space, and that's where the community comes in.
"We're going to make sure we have plenty of opportunity for any groups or any individual to have input and we'll make that readily available, so they can have input on what they want their city park to be," Taylor said.
Community engagement meetings will be announced at a later time.
With this input, TBG will provide a schematic design and preliminary cost estimates.
The maximum $173,800 that will go to the firm are included in this year's budget.
Taylor says most of the green for the "green space," should come from private funds and whatever investment the city must make will be worth it.
"The excitement it'll create downtown, the people wanting to move their businesses downtown, revitalizing other buildings, the tax roll will keep growing. It'll pay back many times," Taylor said.
The time frame for the preliminary design is six months.
If TBG's plan is approved, a fundraising phase is expected to begin July 2021.
Local