Leahy to preside over impeachment trial 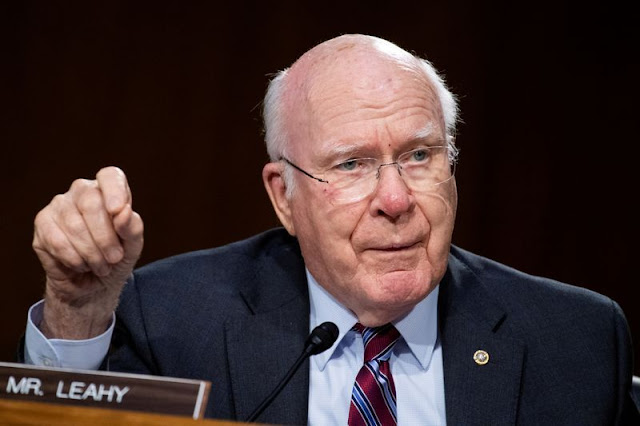 Supreme Court Chief Justice John Roberts will not preside over former President Trump’s Senate impeachment trial, which is scheduled to begin in earnest on Feb. 8.
Instead, Senate President Pro Tempore Patrick Leahy (Vt.), the most senior member of the Senate Democratic Conference, will preside over the trial.
Leahy on Monday confirmed he would wield the gavel and promised to administer “impartial justice.”
“The president pro tempore has historically presided over Senate impeachment trials of non-presidents. When presiding over an impeachment trial, the president pro tempore takes an additional special oath to do impartial justice according to the Constitution and its laws. It is an oath that I take extraordinarily seriously,” he said in a statement.
Leahy vowed he would “not waver from my constitutional and sworn obligations to administer the trial with fairness, in accordance with the Constitution and the laws.”
A spokesman for Leahy said the decision on presiding over the trial is up to Senate Majority Leader Charles Schumer (D-N.Y.) and Minority Leader Mitch McConnell (R-Ky.).
“Leaders have been negotiating all process issues about the trial, and all along we have deferred to them for any announcements about this and all other process matters,” the aide said.
Republican critics say this creates a conflict of interest because Leahy voted in February to convict Trump on two articles of impeachment.
Some have also argued the Senate should not be impeaching a former president, and that only Roberts should be presiding.
“There’s only one constitutional process for impeachment and it is of the president, not a president,” said Sen. Josh Hawley (R-Mo.). “It requires the chief justice to preside.”
Hawley joined House Republicans in challenging the Electoral College vote tally in Pennsylvania and Arizona. Sen. Ted Cruz (R-Texas) also joined House Republicans in challenging the results in those states.
The debate in the House and Senate over those challenges was interrupted when a mob overwhelmed Capitol Police and ransacked the Capitol.
The House voted to impeach Trump a week later, deciding he had incited the rioters.
Trump repeatedly and falsely said widespread fraud had taken place and that an election win had been stolen from him. He also spoke to a crowd gathered near the White House a short time before police were overwhelmed at the Capitol.
Hawley has come under criticism for his decision to challenge the Electoral College results as well, with a number of Democrats blaming him in part for the riot.
Other Republicans say Roberts’s absence undermines the legitimacy of the trial.
“The Constitution requires that the chief justice preside over the impeachment trial of a president but that’s not what we’re doing. To me that’s indicative of the fact that we’re in uncharted waters,” said Sen. John Cornyn (R-Texas), a member of the Judiciary Committee.
“I just think it looks very petty and vindictive and I understand there are a lot of people who are mad but the process itself already looks like a railroad job,” he added.
Cornyn said having a Democrat preside over the trial “really undermines the legitimacy.”
Other GOP senators echoed that criticism.
“If the chief justice doesn’t preside, I think it’s an illegitimate hearing and really goes to show that it’s not really constitutional to impeach someone who’s not president,” said Sen. Rand Paul (R-Ky.).
Leahy on Monday pushed back on the Republican criticism.
“I have presided over hundreds of hours in my time in the Senate. I don’t think anybody has ever suggested I was anything but impartial in those hundreds of hours,” he said.
Asked about his frequent criticism of Trump over the past four years, Leahy responded: “I’m not presenting the evidence. I’m making sure that procedures are followed.”
“I don’t think there’s any senator who over the 40-plus years I’ve been here that would say that I am anything but impartial in voting on procedure,” he said.
Several Democrats pressed last week for Roberts to preside over the trial.
“That is his constitutional duty. I can’t imagine why a Supreme Court justice would not do his duty,” said Sen. Elizabeth Warren (D-Mass.).
Sen. Richard Blumenthal (D-Conn.), a member of the Judiciary panel, said Roberts should preside.
“I think he should because it will be a straightforward, simple trial. I would think that the chief justice lends the dignity and seriousness it requires,” he said.
But Blumenthal acknowledged Roberts “is not required by law to do it.”
National