Lawmakers briefed on security threats ahead of inauguration 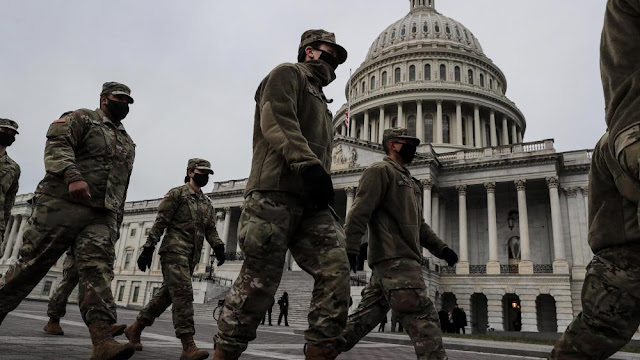 Capitol security officials are warning lawmakers that thousands of extremist supporters of President Trump are planning to try to storm the Capitol ahead of President-elect Joe Biden's inauguration.
Lawmakers were told of four specific armed threats against the Capitol, White House and Supreme Court during a call late Monday night, according to a source familiar with the discussion.
The warnings come less than a week after a mob of Trump supporters succeeded in breaching the Capitol building, interrupting the counting of Electoral College votes and sending lawmakers, staff and journalists scrambling for safety.
Rep. Conor Lamb (D-Pa.) said during an interview Tuesday on CNN’s “New Day” that one of the plots involved pro-Trump radicals trying to surround the Capitol to prevent any Democrat from entering.
"They were talking about 4,000 armed 'patriots' to surround the Capitol and prevent any Democrat from going in," Lamb said. "They have published rules of engagement, meaning when you shoot and when you don't. So this is an organized group that has a plan. They are committed to doing what they're doing because I think in their minds, you know, they are patriots and they're talking about 1776 and so this is now a contest of wills."
"We are not negotiating with or reasoning with these people. They have to be prosecuted. They have to be stopped. And unfortunately, that includes the president, which is why he needs to be impeached and removed from office,” Lamb added.
Lawmakers were already shaken after their lives were in danger during last week’s insurrection. And now, they’re even more fearful after security officials informed them of additional threats.
“It was horrifying, the most chilling hour imaginable, but I don’t want to say anything more,” said one House Democrat who participated in the phone call.
"If you weren't afraid when you got on the call, you were afraid when you got off," said a second lawmaker. "There were still 60 people in the queue who didn't get a chance to ask their questions."
Speaker Nancy Pelosi (D-Calif.) called a meeting late Tuesday morning between House Appropriations Committee Chair Rosa DeLauro (D-Conn.), House Administration Committee Chair Zoe Lofgren (D-Calif.), the new House sergeant-at-arms and the acting Capitol Police chief in light of continued threats to the Capitol and lawmakers, a source said.
Heading into the meeting with Pelosi, DeLauro said the security concerns are "obvious" given Wednesday's brazen attack on the Capitol. But she also expressed confidence that law enforcement will have the area locked down to ensure safety surrounding Biden's inauguration.
"I think they’re getting it under control," she said. "I mean, the concern is obvious from Wednesday, but it’s what you do with the concern and that’s what they’re dealing with."
Authorities appear to be preparing for the worst.
An imposing 7-foot "non-scalable" perimeter fence has been erected around the Capitol, with similar barriers around the Supreme Court and several of the surrounding office buildings. And on Monday night, a train of at least six semis hauling enormous flat-beds stacked high with more fencing was seen driving past the Capitol Police headquarters. A squadron of forklifts was idling nearby to offload the barrier.
The Capitol now has a much more pronounced law enforcement presence, after National Guard members and local state troopers were called in Wednesday to help the Capitol Police clear the building of the mob.
Last week, rioters quickly broke through the low metal barricades originally placed on the grounds. Some members of the mob even stole the barricades and used them as ladders to break into the Capitol.
At least 15,000 National Guard troops will be stationed in Washington on Inauguration Day, with 43 states and territories providing support.
D.C. Mayor Muriel Bowser (D) and other lawmakers are urging the public to stay away from Washington on Inauguration Day, given the security threats of pro-Trump extremists as well as the ongoing COVID-19 pandemic.
“I don't see any reason why you should come. To me, it's an event that obviously with COVID and everything else, we were planning on having a much more reduced inaugural,” Rep. Tim Ryan (D-Ohio), the chairman of the House Appropriations subcommittee that oversees funding for the Capitol Police and legislative branch operations, told reporters during a Monday briefing.
“But given all the activity in the last week and the activity that's planned in the coming days, I don't see any reason to show up,” Ryan said.
Beyond the security threats against the Capitol premises, members of Congress are also facing angry Trump supporters while traveling to and from Washington.
Last Friday, Sen. Lindsey Graham (R-S.C.) had to be escorted by police while walking through Reagan National Airport near Washington because Trump supporters kept harassing him.
The Trump supporters screamed obscenities at Graham, calling him a "piece of shit” and a “traitor.”
Due to the threats, lawmakers have been instructed to send their travel itineraries to security officials ahead of time. That will give offices and agencies such as the Sergeant at Arms, Capitol Police, Washington Metropolitan Airports Authority and the United States Air Marshal the ability to coordinate protection for those lawmakers, according to a notice that was sent to members in the wake of the attack.
Some lawmakers have decided to temporarily avoid air travel; others are weighing whether to even be in the District for the inauguration.
Rep. Alan Lowenthal (D-Calif.) said he was just relieved that law enforcement is aware of the terror threats and briefing Congress.
“I was very frightened about the potential numbers of people who might be coming from [Jan.] 17th on,” Lowenthal said on Tuesday. “I’m just very glad they are taking this very seriously and alerting us and telling us what the intelligence is and how they’re dealing with it.
National