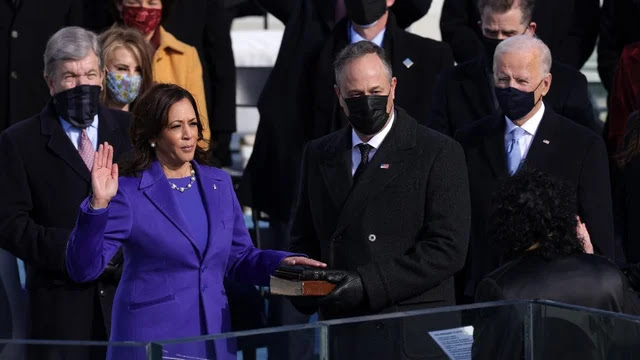 Kamala Harris has been sworn in as vice president of the United States, making history as the first woman as well as the first Black and South Asian American person to hold the office.
Harris, the former senator of California, was sworn in before her running mate Joe Biden was sworn in as president right outside the Capitol in Washington, D.C. just before noon local time on a brisk Washington, D.C., morning at a heavily secure Capitol.
Swearing Harris in was Supreme Court Justice Sonia Sotamayor, who is the first Latina to serve on the highest court in the land.
Despite the historic nature of Wednesday’s inauguration, festivities were muted due to the coronavirus pandemic and the continued risk of violence following the insurrection at the Capitol two weeks ago.
Over 20,000 National Guard members have been in D.C. since last week, creating a tight perimeter around the District’s downtown area, closing a large number of streets and Metro stops in the process. As a result, flags instead of spectators filled the national mall.
Still, some of the usual fanfare still remained, such as the attendance of living former presidents Bill Clinton, George W. Bush and Barack Obama. Notably, outgoing president Donald Trump was not in attendance, though his outgoing vice president Mike Pence was. Former President Jimmy Carter, 96, and his wife Rosalynn Carter, 93, were also not in attendance.
National