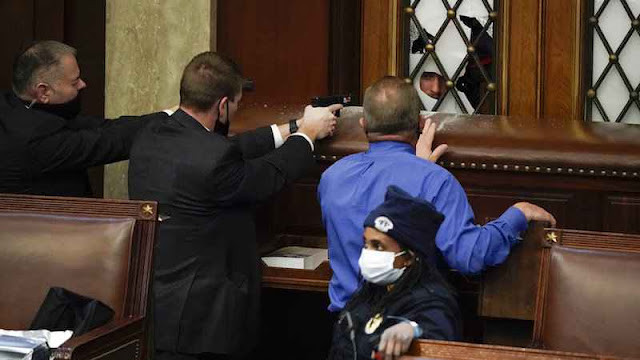 Law enforcement drew their firearms and deployed tear gas amid protests at the Capitol building Wednesday during Congress’s certification of the Electoral College results.
Officers were seen with their weapons drawn inside the House chamber, appearing to point them at demonstrators outside the door leading into the historic room. Glass from the door was broken, and law enforcement barricaded the entrance.
Senators have been evacuated from the premises among the chaos, and House members have been moved off the floor of the chamber. Lawmakers and reporters in the area have been told to put on gas masks, and some members were overheard by the press pool praying and calling their families to inform them that they are safe.
At one point, a protester made it up to the dais in the Senate chamber, shouting “Trump won the election,” according to a reporter on the scene.
The storming of the Capitol comes as scores of supporters of President Trump descend on the Capitol to protest Congress’s joint session to certify the Electoral College results President-elect Joe Biden winning the November election.
The president sent out three tweets as the protests ramped up, one savaging Vice President Pence as not having “the courage” to block the certification in his ceremonial role overseeing the process and another asking his supporters to support Capitol Police.
“Please support our Capitol Police and Law Enforcement. They are truly on the side of our Country. Stay peaceful!” he said in the second message.
"I am asking for everyone at the U.S. Capitol to remain peaceful. No violence! Remember, WE are the Party of Law & Order – respect the Law and our great men and women in Blue. Thank you!" he added in a third post.
Before the demonstrators stormed the Capitol building, they were seen clashing with law enforcement at the scene to try to breach the barriers that had been erected.
National